City centre, main street, the business district—whatever you may choose to call it, a city’s downtown is where the magic happens, and we have the numbers to prove it. According to a recent poll by Expedia.ca, one-third of all Canadians prefer to stay downtown when on vacation. But not all downtowns are created equal. We searched high and low for innovative art scenes, top walk scores, and that little je ne sais quoi that makes a city unforgettable. We’ve narrowed it down to 10 of Canada’s coolest downtown areas, from up-and-comers to perennial favourites. Put these on your list, downtown lovers. 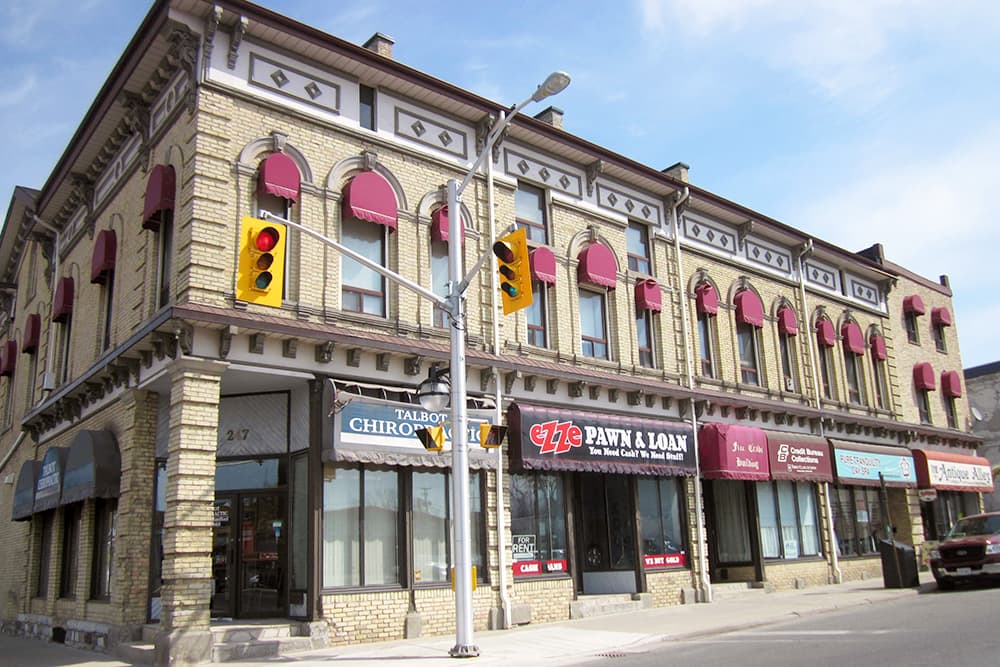 Picture this: art crawls, craft beer, and international cuisine. We bet you’re not thinking about St. Thomas, Ontario, but you should be. The Railway City Arts Crawl, which takes place February 23 and 24 in 2018, has local art, music, and beer. And speaking of beer, you can’t miss the Honey Elixir brown ale at Railway City Brewing Co.

Taste of the town: Rail City Bistro features a different international locale each weekend, from India to Hungary to…Tex-Mex? All we know is, it’s good.

We love the nightlife: The Back Alley just wants you to dance, and judging by its live music events, DJ nights, and karaoke, it’s succeeding. 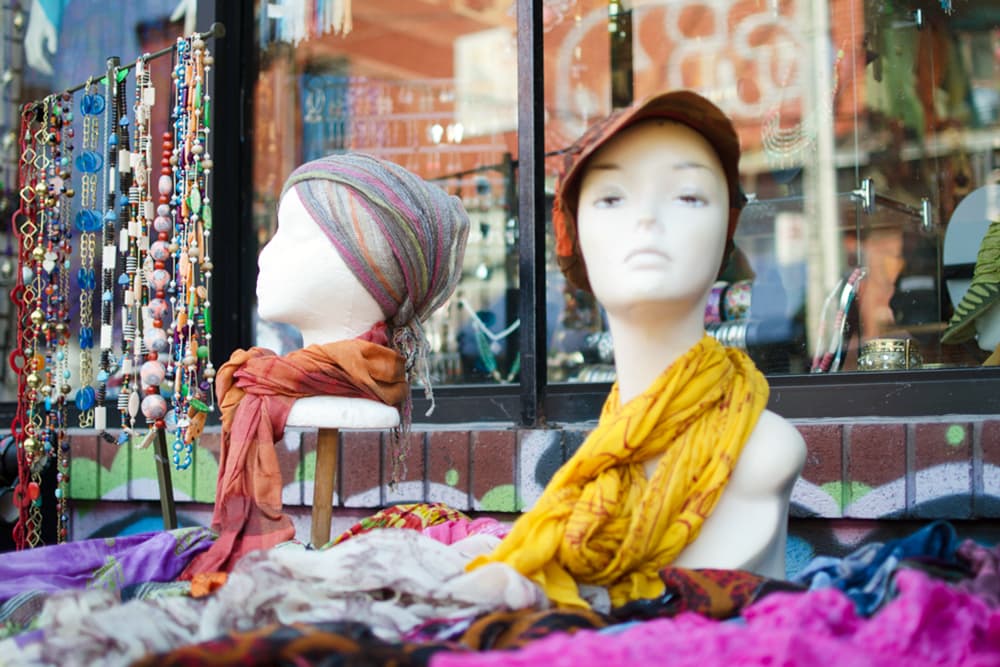 There’s no argument: Downtown Toronto is hip, and Kensington Market wins the prize for the coolest of the cool downtown neighbourhoods. If “rosé all day” is your motto, a laid-back brunch at vegetarian Hibiscus Café is for you. And after a boozy brunch, it doesn’t get much better than tipsy shopping, especially when you’re at Bungalow, a vintage-lover’s paradise of clothes and home goods.

Taste of the town: What’s the opposite of a vegetarian café? Try “National Bacon Headquarters,” aka the brick-and-mortar location of food truck sensation Bacon Nation.

We love the nightlife: Sneaky Dee’s hipster cred is through the roof. If you’re looking for a good party, this music venue has you covered any night of the week. 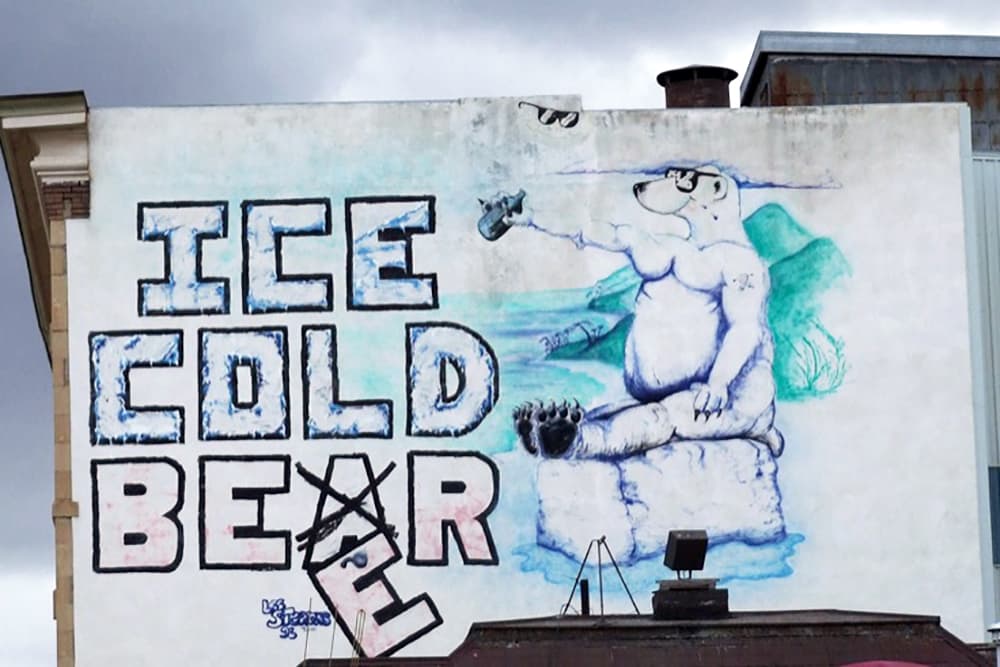 You might know Moose Jaw as the home of the world’s second largest moose—or you might not know it at all. Moose Jaw is outdoorsy (Crescent Park is the “Jewel of the Prairies”), artistic (there are more than 40 murals throughout downtown), and easy to get around (the trolley is downright delightful). What else do you want from a charming, small downtown? If the answer is friendly locals, it’s got that too.

Taste of the town: Grab a pint at Browns Socialhouse and meet your new best friends.

We love the nightlife: Cask 82 is the new kid on the block, but its wine specials, live music, and 1am closing time made it the neighbourhood hot spot right away. 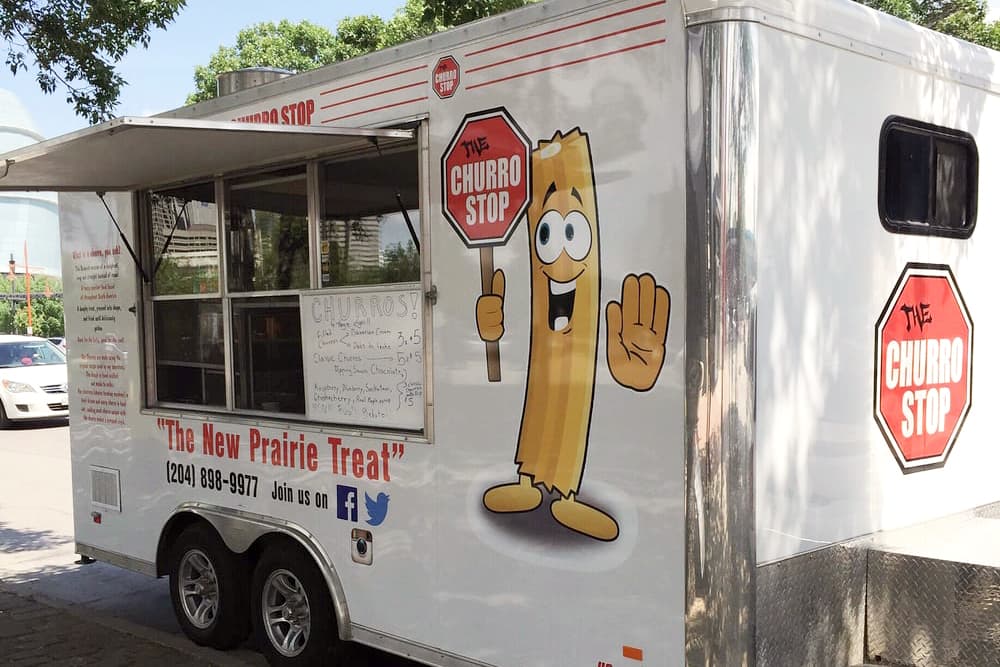 It’s no mistake Winnipeg is home to multiple Olympic speed skaters—in winter, its frozen rivers make up the longest natural skating path in the world. It’s also got the Canadian Museum for Human Rights, the first national museum to be built outside the National Capital Region. A city centre with that kind of record certainly deserves to be called one of the best downtowns in Canada.

Taste of the town: Winnipeg’s food truck scene is booming, and while the season may be over, you can still get your street food on at Merchant Kitchen.

We love the nightlife: Pyramid Cabaret is like the Kinder Surprise of entertainment: you never know what you’re gonna get. Just go there. Trust us. 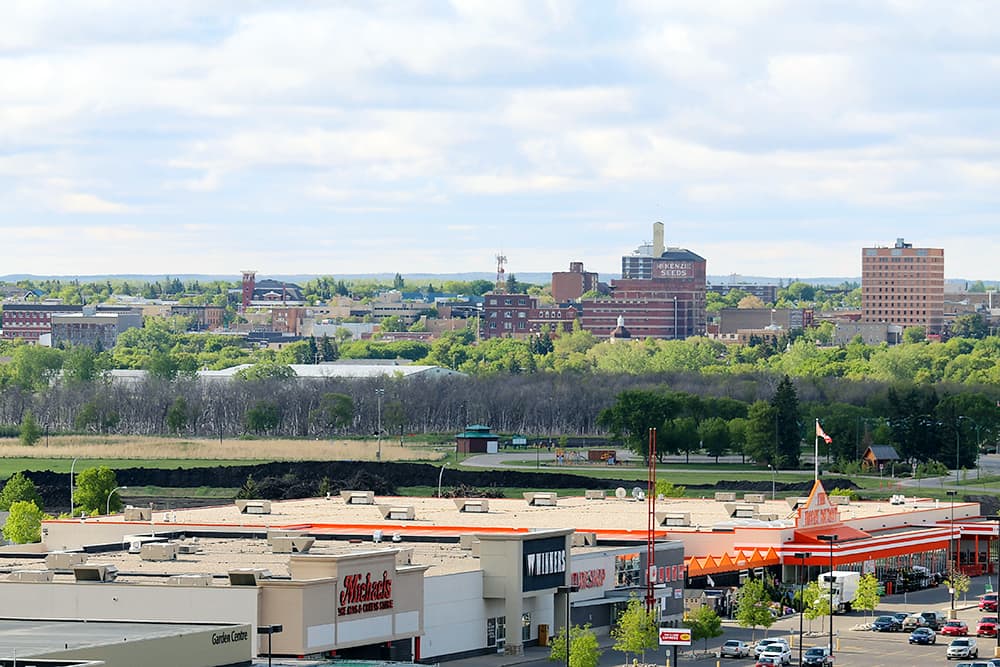 Recent revitalization projects have Brandon on the up-swing. Cute coffee shops and boutiques like Ten Thousand Villages and Abby Rose are moving into Rosser Ave., and there are loads of adorable winter activities. The Global Market turns into a Christmas market in November and December, and there’s an outdoor ice skating rink across the street.

Taste of the town: Komfort Kitchen serves up just what you’d expect: huge portions of classic comfort food like steak and eggs.

We love the nightlife: With events like Margaritafest and Oktoberfest, plus delicious bar snacks, The Dock on Princess is the place to be on a Friday night.

The sleepy fishing village of Lunenburg is quickly turning into an artists’ haven—and with such incredible scenery, there’s no shortage of inspiration. Colourful Old Town Lunenburg is a UNESCO World Heritage Site, lined with art galleries of all types. Our favourites: Peer Gallery is an artists’ co-op featuring contemporary Nova Scotia talent; Power House Art has a large collection of Inuit art and sculpture.

Taste of the town: The “artists” at Ironworks Distillery make a different sort of masterpiece—the kind that you can drink.

We love the nightlife: Grand Banker Bar & Grill features local talent from JUNO winners to blues legends. Order up a Dark & Stormy and get into the groove of the maritimes. 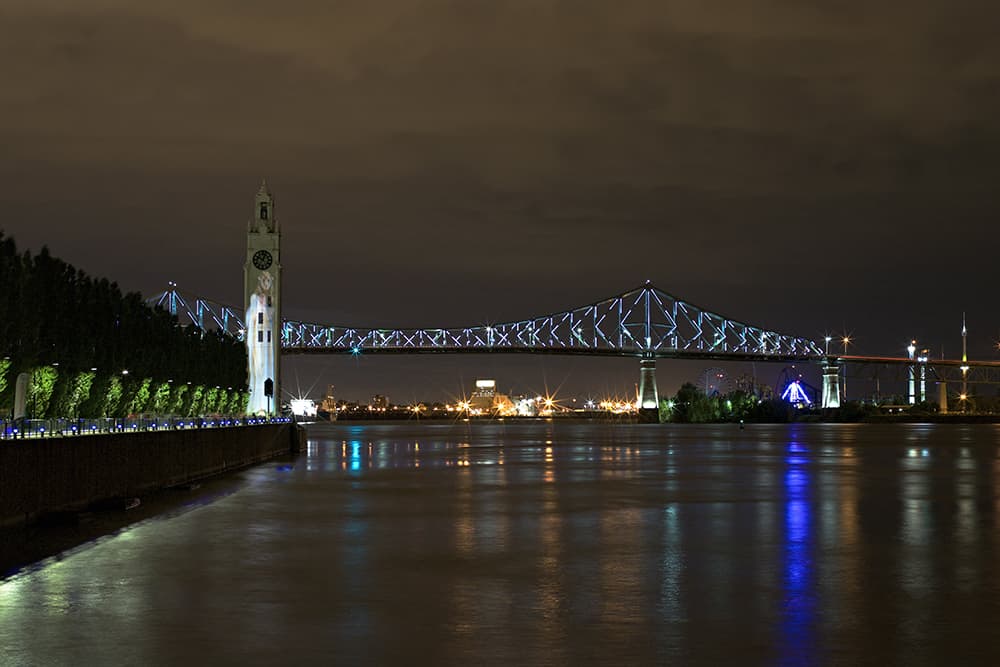 Located just across the St. Lawrence River from Montreal, Longueuil’s restaurants serve up a diverse flavour palette—and with a walk score of 56, trying them all is as easy as stepping out your door. A stroll along rue Saint-Charles Ouest reveals Portuguese at Silva Grillades, Italian at Restaurant Messina, and Vietnamese-Thai fusion at Lanterne. With a home base in Longueuil, your taste buds will never be bored.

Taste of the town: There’s tons to try here, but the city’s most legendary food is found at Resto Pub St. Mark, known for its massive burgers.

We love the nightlife: With colourful drinks and a rainbow of umbrellas hanging over the patio, Bungalow Bar Salon is an Instagram story waiting to happen. 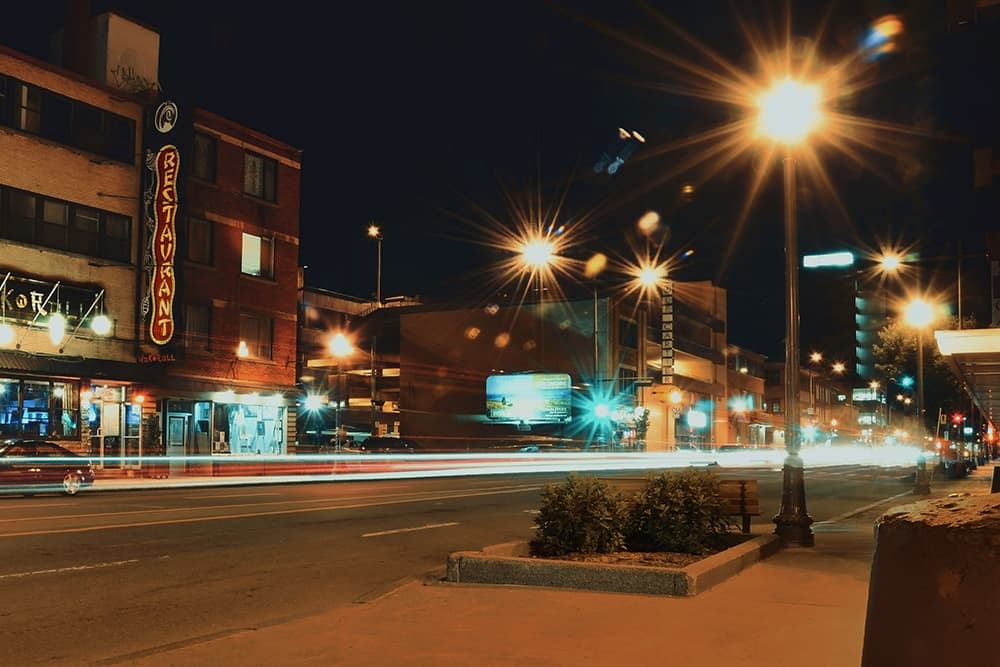 Québec City’s Saint-Roch neighbourhood is the Kendall Jenner of Canadian downtowns—its facelift is barely noticeable, but it’s certainly brought a lot of publicity. This trendy area is the city’s “new downtown,” and it is a star. Introduce yourself to its charms with a beverage at Noctem Artisans Brasseurs and a stroll through the boutiques of rue Saint-Joseph.

Taste of the town: Gourmet sandwiches and coffee at La Boîte à Pain perfectly capture the laid-back yet trendy atmosphere of Saint-Roch.

We love the nightlife: Art, music, culture—is there anything Le Cercle doesn’t do? Be there when this neighbourhood staple celebrates its 10th anniversary on November 11. 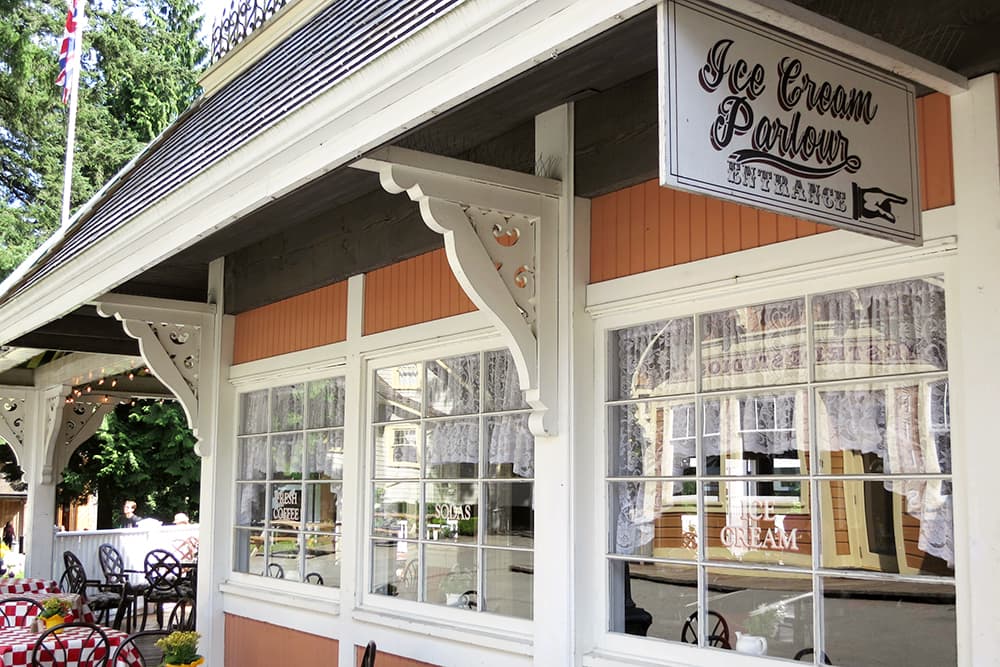 Burnaby is much more than Vancouver’s little brother. With a walk score of 64 and just as many cool attractions to walk to, this ‘burb to the east of “Rain City” has a charm all its own. Take a trip back in time at the old-fashioned Ice Cream Parlour, or keep it modern as you gallery-hop from Deer Lake Gallery to Burnaby Art Gallery.

Taste of the town: End your day with oysters, wine, and lake views at Hart House Restaurant. 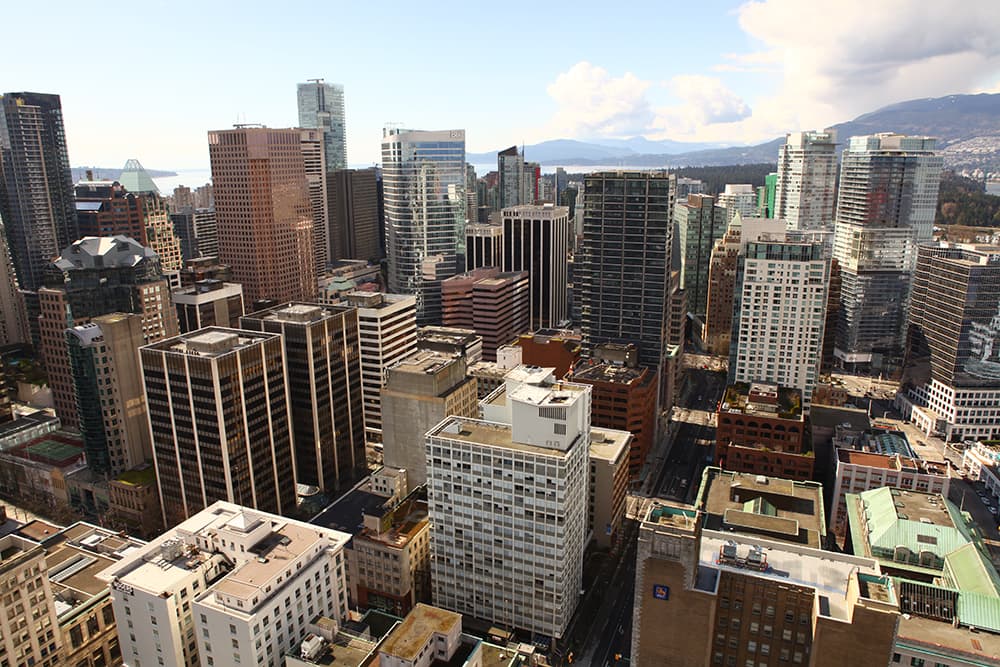 When it comes to accolades, Vancouver’s won them all: most liveable, most walkable, most eco-friendly. Spend a day touring downtown’s quirky public art, from the Trans Am Totem to the Digital Orca, a leaping, pixellated whale. Check out the view from Vancouver Lookout and visit Gastown for a pic of the Steam Clock. Beautiful and cool? Vancouver has it all.

Taste of the town: With organically raised meat, foraged vegetables, and sustainable seafood, a meal at Wildebeest is about as Vancouver as it gets.

We love the nightlife: “Level up” your nightlife at the video-game-themed EXP Restaurant + Bar, with drinks like Nuka-Cola Quantum and Red Dead Lemonade.

You told us you loved the downtown lifestyle, and we said “challenge accepted.” You don’t need to trek to the big city to find loads of fun things to do downtown—you might have a rising star right in your own backyard. Next time you feel the need for an adventure in the city centre, you know where to go. 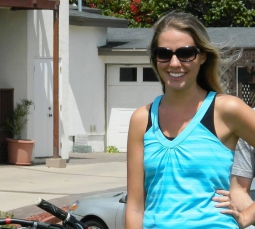