Aright, buddy, you’ve sat on that couch for most of 2016, binge-watching this show and that. Now that it’s 2017, it’s time to get out of the house. New Year’s resolutions aren’t just about dusting off your gym membership or cutting back on your Cheez-It® addiction. Some of the best resolutions are about trying new things, seeing new places, and getting to know a city in new way. Without further ado, here are the top things to do in Vancouver in 2017.

Add “art shows” to your list of New Year’s resolutions and put the PuSh International Performing Arts Festival on your calendar. This three-week event, which starts on January 16, is a multi-genre festival that blends beauty and whimsy with the strange and fantastical. Find a good spot in the crowd, and prepare to have your expectations blown.

Wear the “wino” label with pride as you attend the VanWineFest. This highly anticipated 2017 event, which takes place February 11-15, brings together 180 wineries from 16 countries for tastings and seminars. This year’s theme country is Canada, so you know you can look forward to excellent sips.

Your Instagram could use some new pictures of your food. Add images to your feed when you attend Dine Out Vancouver, the largest food and drink festival in Canada. Nearly 100,000 diners eat out during this 17-day event, when hundreds of restaurants offer prix-fixe menus ranging from $20 to $40 a person. Munch on some lunch and make your social followers jealous from January 20th-February 5th.

Did you know that Vancouver is home to one of only six Elizabethan hedge mazes in North America? The VanDusen maze has been around since the early 1980s, and includes more than 3,000 manicured cedars. This spot—located in the VanDusen Botanical Garden—and is a favourite for both casual visitors and film crews. Put “getting lost somewhere new” on your list of things to do in Vancouver this year.

If you spent 2016 chuckling at memes and witty sitcoms, it’s time to up your game in 2017. Make your way to JFL NorthWest, a huge comedy event that spans multiple comedy clubs in the city and takes place from February 16-25. Tons of local comedians and national stars will be testing out new material on audiences—which, we promise, will be a lot funnier than any mid-week TV show you have saved on DVR. 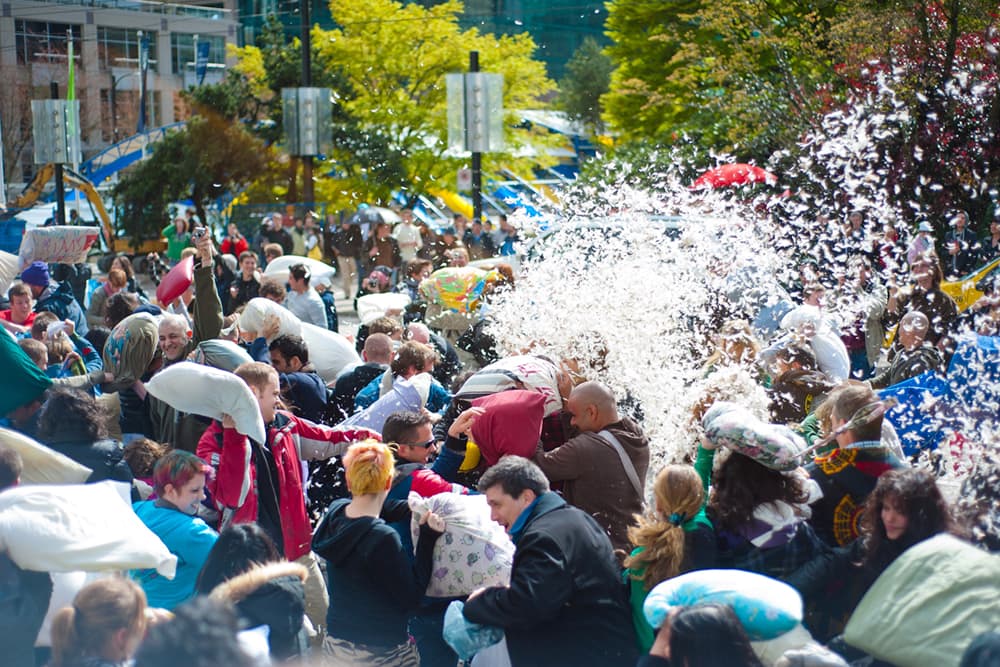 Still have some leftover stress from 2016? Hold on to it until April, when the annual Pillow Fight Flash Mob takes place. As its spontaneous in nature, you won’t find any official event website for the Vancouver 2017 bash, but you can follow their Facebook page for updates on the time and place. Last year’s event transpired in front of the Vancouver Art Gallery.

7. Work Out Your Brain

Not many of us have PhDs, but we can pretend to for the day at TEDxStanleyPark. This TED conference features some of the most brilliant minds in the world, showcasing new breakthroughs in technology and new ways of thinking about the world. This year’s theme is Ideas to Action, and takes place on March 4.

Whether you’re looking for the top Vancouver events of 2017 or just want to expand your horizons when walking through the city, make this the year of trying new things.

Take a Peek at Our Other 2017 Travel Guides
17 Cities to Visit in 2017
Kingston, Ontario
Toronto, Ontario
Calgary, Alberta

Previous post Get Off the Couch: 7 Things to Do in Toronto in 2017