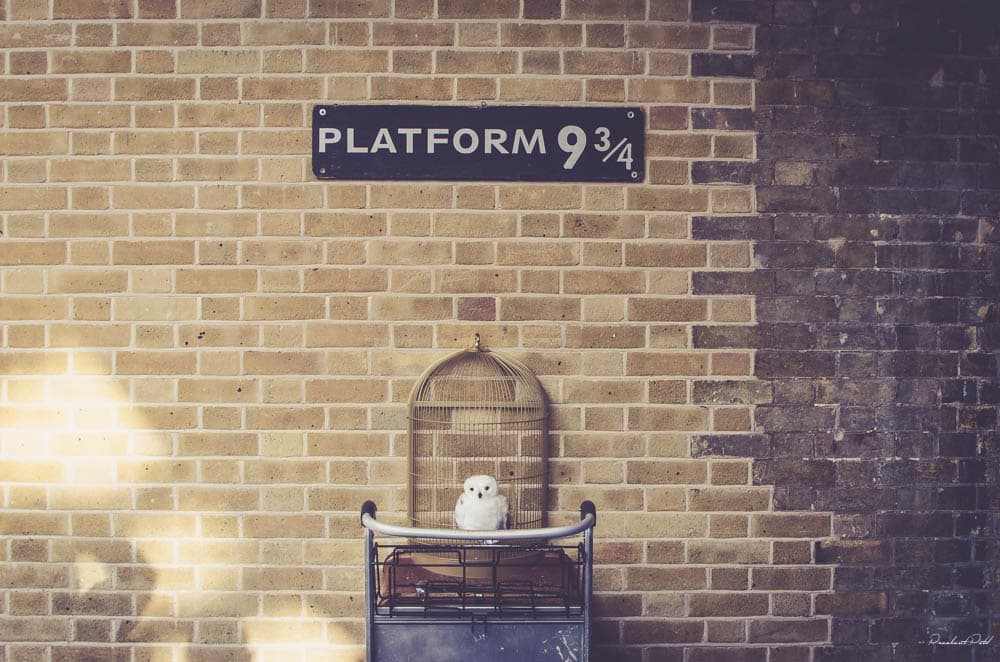 Do you know what a Hufflepuff is? What the accio charm does? Where the Hogwarts Express leaves from King’s Cross Station? Of course you do! “Harry Potter” nerds know it all when it comes to seven books and eight movies of magic. However, if you’ve never been to the U.K., you may not know all of the best real-life Harry Potter locales to visit. Let’s set a lumos charm to light the way to the top spots in town.

In most instances, closing your eyes and running into a wall is a terrible idea. But not if you’re a magical person! As any true fan knows, the only way to get onto the Hogwarts Express at the beginning of the school year is to board the train at Platform 9 ¾, located in the King’s Cross Station. Despite numerous attempts, no muggles have successfully gone through the wall of 9 and 10, which is why the city of London decided to help. You’ll find a cast iron Platform 9 ¾ sign in the real railway station, along with a half-emerged trolley cart. It’s common to see Potter fans lining up to snap a photo at the bricks, hoping that one day they’ll be able to push on through to the other side.

If you’re a bookworm like Hermione Granger, you can’t leave the U.K. without visiting the “Hogwarts Library.” Madam Pince won’t be lurking around Bodleian Library located in the University of Oxford, but you will see an array of medieval architecture similar to the movies. Stand in the spot where Harry tried to figure out clues during the Triwizard Tournament or where Hermione tried to make the connection between Nicolas Flamel and the Philosopher’s Stone. Oxford was home to a few other Harry Potter sets as well. Walk next door to the big-windowed Divinity School, which posed as the Hogwarts infirmary where Ron and Harry frequently visited after Quidditch games. And don’t miss the dining hall in Christ Church College, which was the inspiration for the Great Hall. Unfortunately, the portraits don’t move–at least, not when people are around.

By the Leaky Cauldron

After all that walking around London, it’s understandable that you’ll be in need of some butterbeer (or real beer). If Hagrid was around, he’d take you straight to the Leaky Cauldron, the wizarding world’s favourite pub. While the U.K. is well-stocked with bars, there isn’t necessarily a magical pub to visit. There is however, The Glass House, an optician store that served as the entrance to the Leaky Cauldron in the first “Harry Potter” film. The shop is located in Bull’s Head Passage in the Leadenhall Market, which features a variety of stores and restaurants. Order a drink, some lunch, and run into fellow Potter geeks doing the same.

Along the Bridge to Magic

You won’t have to dodge Death Eaters when you walk along Millennium Bridge, though you may have to wind through slow-moving tourists. This architectural marvel features prime views of the River Thames and St. Paul’s Cathedral, and was featured in the opening scene of “Harry Potter and The Half-Blood Prince” when Voldemort’s followers destroyed the bridge in a show of rising power. Don’t worry–Harry saved magical and muggle London for you to enjoy.

As J.K. Rowling once said, Hogwarts will always be there to welcome you home. London too, is ready to welcome you for a visit. Whether you fancy yourself a Gryffindor, a Slytherin, Ravenclaw, or even one of those Hufflepuff sorts, see the sights, be a part of the magic, and maybe one day your Hogwarts acceptance letter will finally arrive.

Which Harry Potter locale are you looking forward to exploring the most?

Previous post 5 Things to Know Before Travelling to Thailand