The Most Popular Poutine in Every Province

Some foods are worth getting into a fist fight over (or at least a verbal sparring), and poutine is a top contender on that list. Savoury gravy. Tangy cheese curds. Spongy fries sopping up the sweets and salts. It doesn’t get better than this.

Now, which poutinerie is actually the best in the country is up for fierce debate. To settle the score, we at Expedia.ca partnered with the chief authority on user reviews, Yelp.ca, to uncover the best poutine in Canada. After pouring over their data of the highest-rated poutineries in the country, here’s the list of the most popular poutine by province. 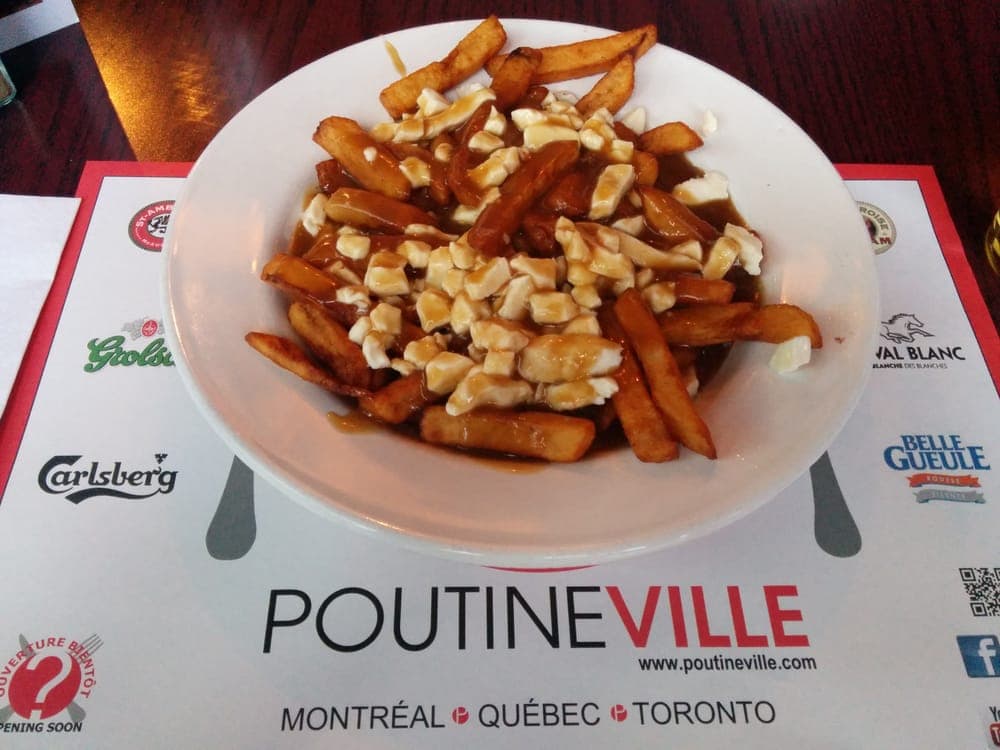 It’s no easy thing to stand out in the poutine capital of the country. Located in the Ville-Marie neighbourhood of Montreal, Poutineville has an unrivaled fan base in the province. Maybe it’s the gargantuan-sized portions. Maybe it’s the friendly service to help you choose your options. Or maybe it’s the menu that offers 50+ ingredient combinations, like brie, marinated eggplant, and red wine gravy. Whatever the secret is, this place gets high marks.

While You’re in Ville-Marie: Burn off those poutine carbs when you rent a bike and ride along Parc linéaire du Témiscamingue La ligne du Mocassin. Swing some clubs at Club de Golf Ville-Marie. And learn about local town characters at Maison du Frere-Moffet. You may also want to aim your trip during La Poutine Week, which happens during the first week of February. 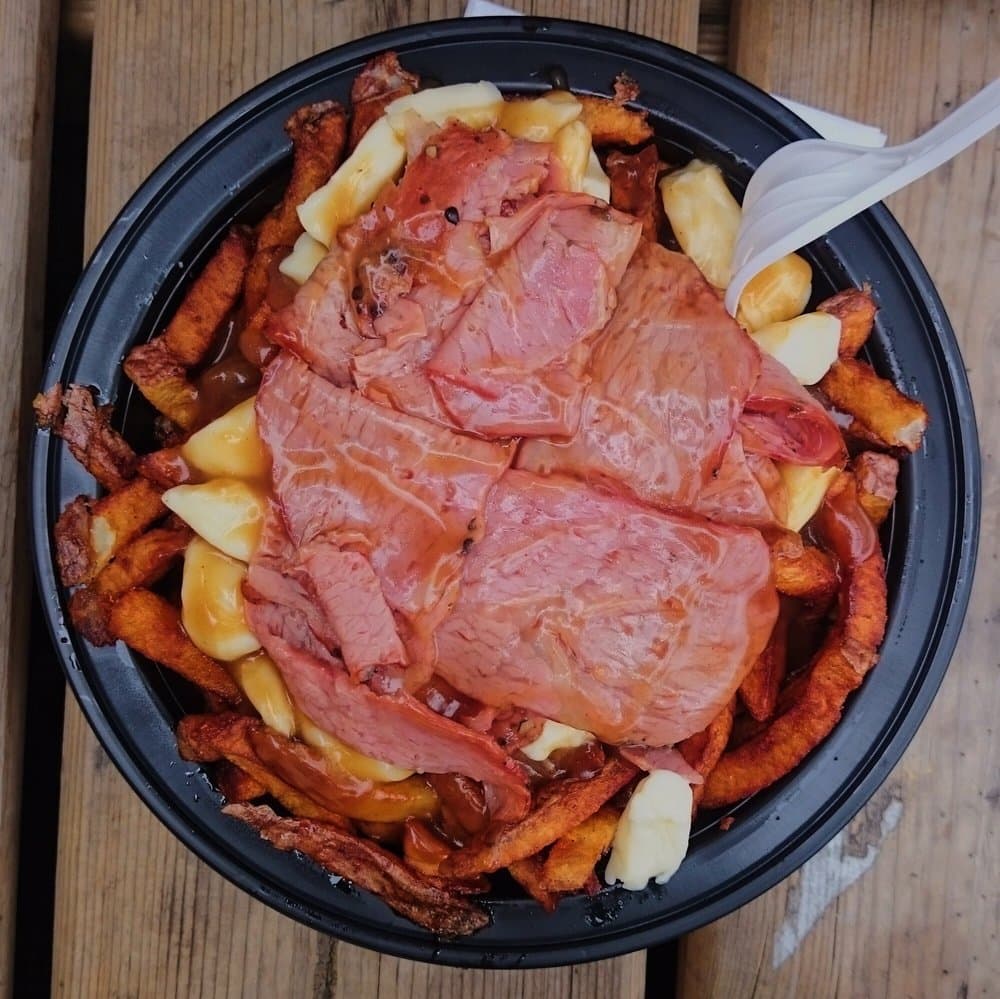 We don’t know about you, but if an eatery is serving up “Drunken Sailor” poutine with beer-soaked breakfast sausage along with onions and bacon, you can believe that we’re already in line, waiting to order. Nom Nom Nom Poutine & Crepes–located in the Alexandra Park neighbourhood of Toronto, lives up to its name. Check out toppings like pulled pork, spicy lamb sausage, and brie.

While You’re in Alexandra Park: Take a walk through Chinatown, which is only a few blocks away. Keep the Canadian Pride flowing when you stop into the Hockey Hall of Fame. And find some vintage clothing and house decor at Bungalow. 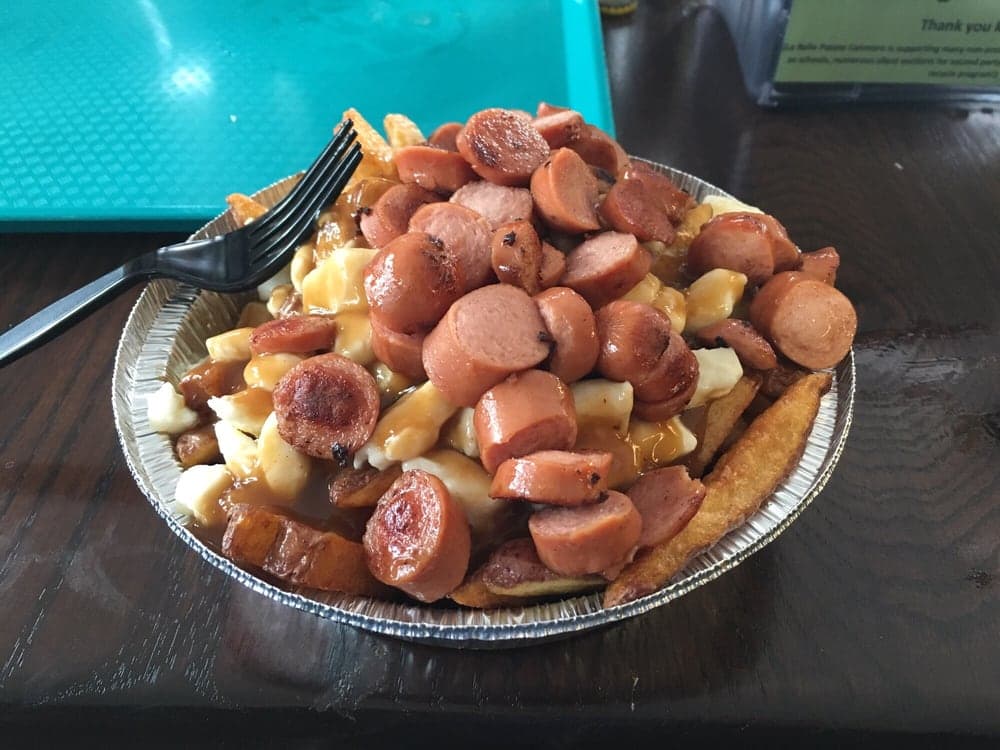 No fuss, no muss, only hand-cut fries doing the breaststroke in a lake of gravy. We’re talking about La Belle Patate in Canmore, Alberta. This joint serves their poutine with meat, more meat, or even more meat. Take your pick of braised beef, turkey, or a mish-mash of smoked goodness.

While You’re in Canmore: Work off all that poutine and steel your nerves when you sign up for a Canmore Caves Tour. Check out artifacts from the old-time railroads and coal mines when you stop into the Canmore Museum & Geoscience Centre. Gander at local art when you wander through The Avens Gallery, or pick out some glasswork for your house at Fireweed Glass Studio. 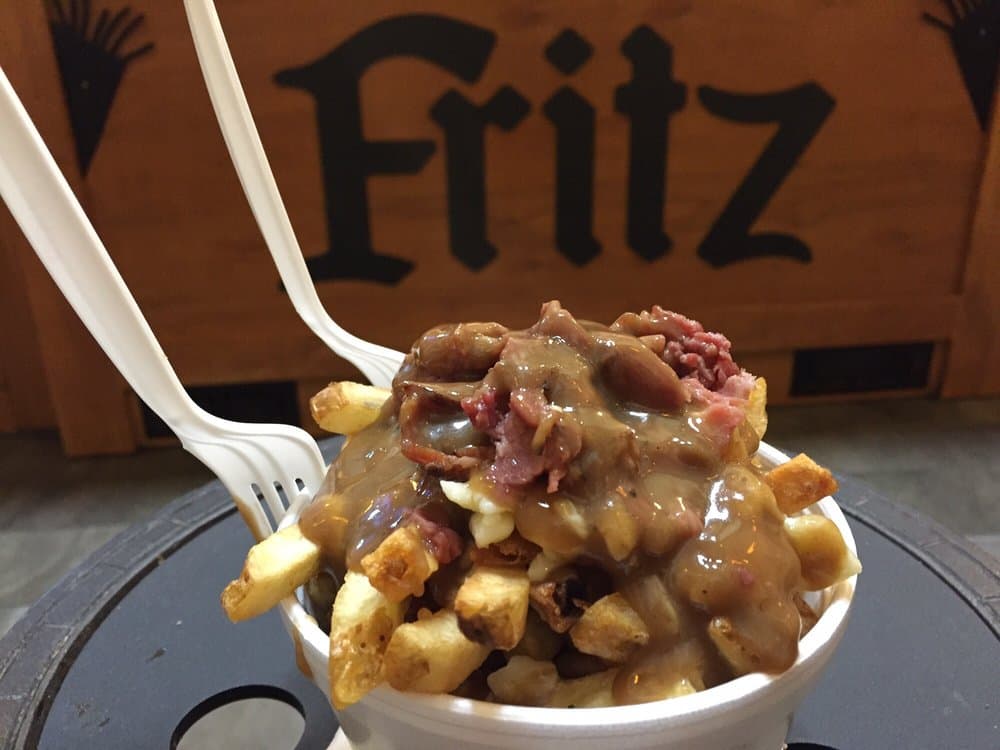 You love cheese, we love cheese, and if you want poutine with a generous helping of cheese curds, Fritz European Fry House in Vancouver is ready to take your order. Anticipate gooey, salty goodness when you build your perfect meal. Oh, and if you’re really hungry, “bucket” size comes after jumbo.

While You’re in Vancouver: Burn up all those calories when you stroll through George Wainborn Park. Make a stop into the Contemporary Art Gallery. Or lounge with a full tummy at The Cinematheque and watch classic flicks. 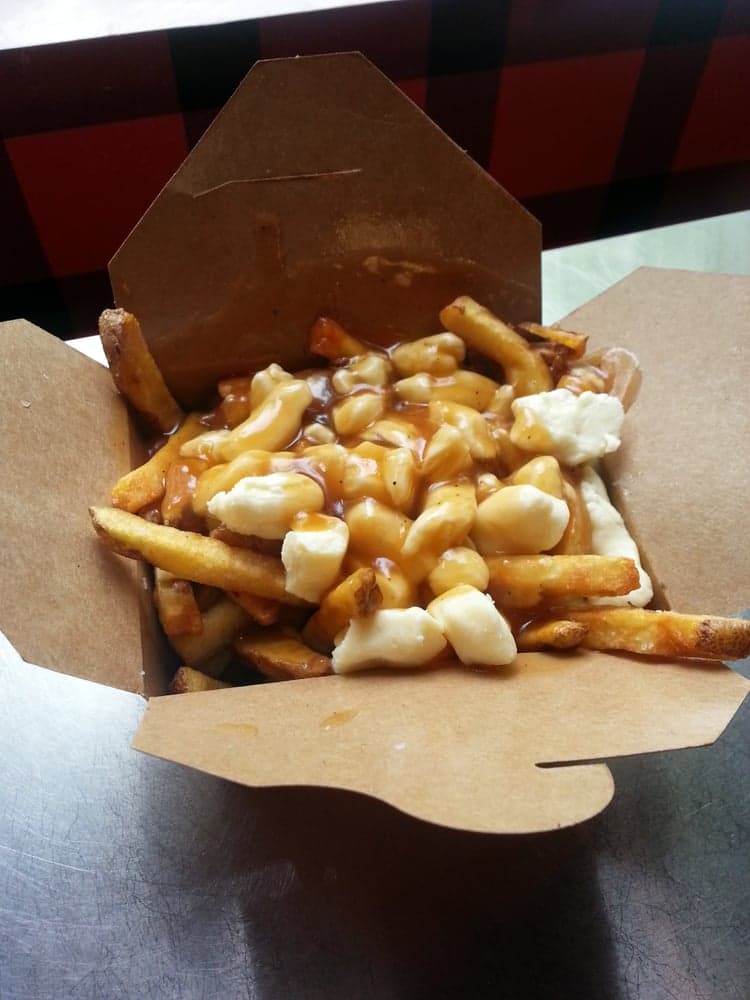 So nice, it shows up thrice (hey, if Smoke’s Poutinerie doesn’t like playing by the rules, we won’t either). Smoke’s Poutinerie isn’t your average poutine player, nor does it want to be. Bold, spicy, different, loud—this is what their menus are all about. It’s no wonder its fans go bonkers for each new flavour. Get your fork poised for options like perogy poutine, Philly cheesesteak poutine, and nacho grande poutine, among other staples. For this reason, Smoke’s reigns king in Winnipeg, Manitoba; Halifax, Nova Scotia; and Saskatoon, Saskatchewan.

While You’re in Winnipeg: Burn off those fries at Stephen Juba Park. Take a load off at Centennial Concert Hall. Or explore exhibits around moon rocks and 19th century shipwrecks at the Manitoba Museum.

While You’re in Halifax: Walk it off at Halifax Citadel National Historic Site. Find strange and wonderful treasures at Black Market Boutique. And take a boat tour with Murphy’s the Cable Wharf.

While You’re in Saskatoon: Walk around Friendship Park. Check the calendar for live music at O’Brians Event Centre. And grab dessert at the Saskatoon Farmers Market. 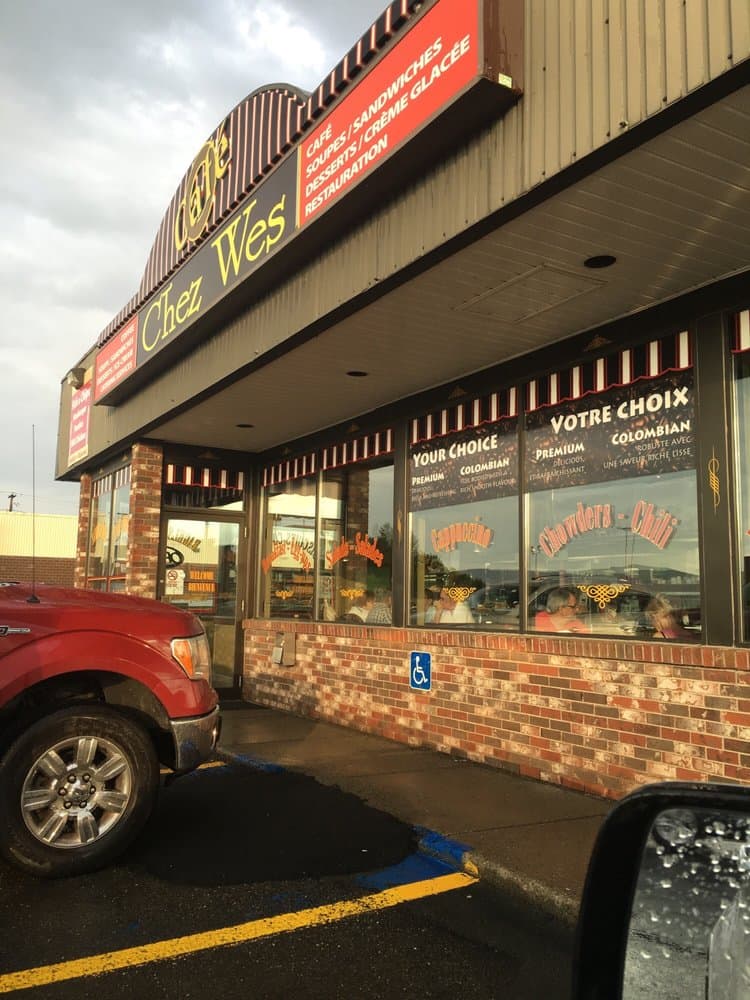 A homecooked meal beats just about anything. At Cafe Chez Wes in Campbellton, New Brunswick, homestyle soups, oven baked fish, and smoked meats are always prepared with love. So you know you can expect something good when you order up their signature meatball poutine. You’ll also make your fork happy when you dive into their twist on breakfast poutine. Just be sure to leave room for their decadent, homemade desserts.

While You’re in Campbellton: Go for a stroll through Sugarloaf Provincial Park or put in some recreation time at the Campbellton Civic Center. 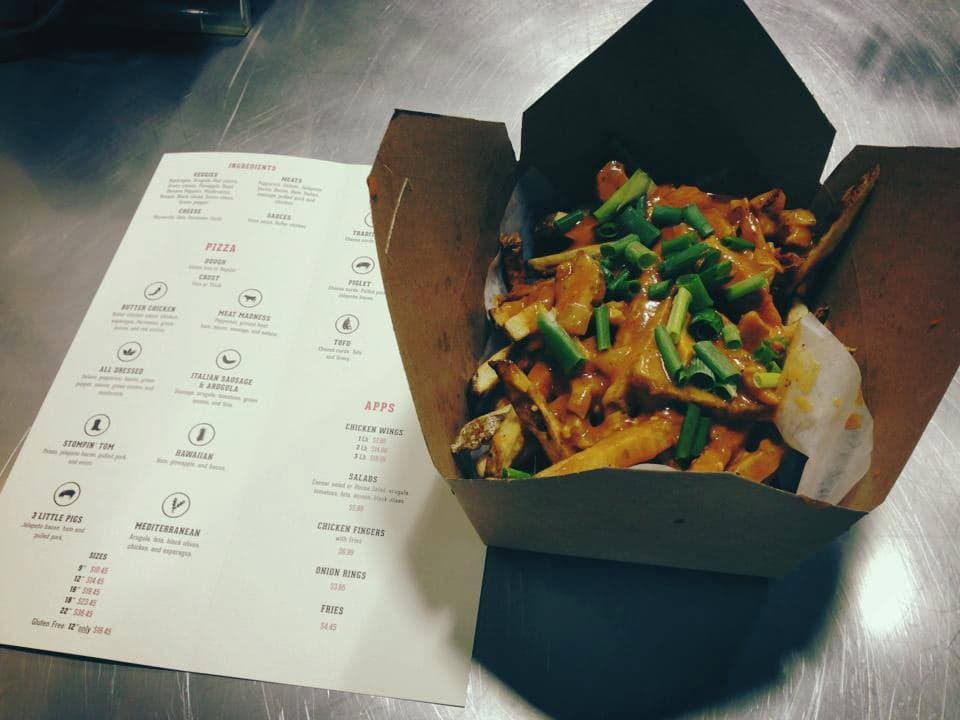 Via Yelp/Pizza and Poutine Company

Hungry Ghost (formerly The Pizza and Poutine Company), features late-nite poutine to satisfy your cravings. Walk into this hotspot in Charlottetown, Prince Edward Island, and spoon up favourites like the Piglet, with pulled pork and jalapeno bacon, or the Monster, with sausage, hamburger meat, and two cuts of pork.
While You’re in Charlottetown: Walk off lunch with a stroll along Peake’s Wharf. Pick up some colourful pieces of jewelry at DWN.TWN.FOX. And admire the bold art of Lorimer Gallery.

Hot. Cheesy. Way more calories than any cardiologist is comfortable with. Oh, poutine, we love you. And remember: Just because you now know the top poutineries in each province, it doesn’t mean you have to stick to only one. Why not make a challenge of it and travel to them all? Remember the napkins.

Next post The 34 Most Breathtaking Places in North America