Québec City is unlike any other city in North America, let alone in Canada. It’s quaint and charming yet wise beyond its 400+ years. It’s architecturally stunning, beautifully French-speaking, yet surprisingly humble given its UNESCO World Heritage status. *hair flip* All in all, Québec City is a little Europe you can drive to.

Relatively small as it is, there are still many parts of this city waiting to be discovered and explored by visitors like you. From a culturally rich history and a mouth-watering culinary scene (so many drool emojis) to a plethora of winter activities, there’s un peu something for everyone in Québec City. But first, start here with these must-see spots in Québec City: 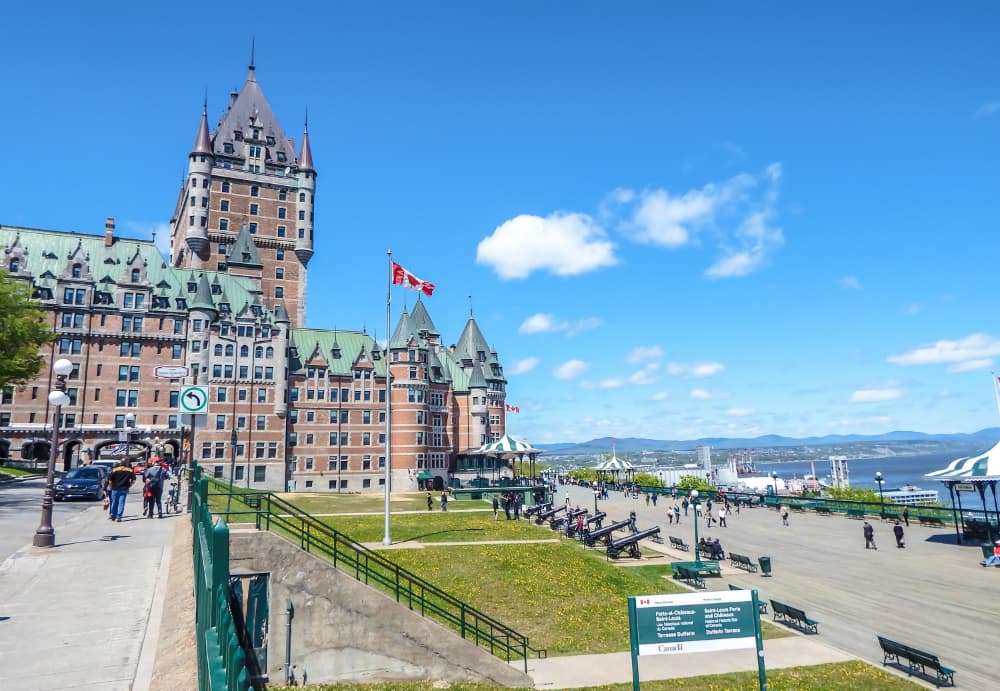 The Dufferin Terrace is the wide wooden boardwalk that sits at the foot of the Château Frontenac, the world’s most photographed hotel that you totally thought was a castle this whole time. Here on the Terrace, you’ll find arguably the best views in Québec City: looking up at the famed hotel, downhill into the historic Petit Champlain district, underground into an archaeological site, and even across the St. Lawrence River. The Dufferin Terrace is the best spot in town for strolling in the summer and enjoying a high-speed (read: terrifying yet exhilarating) toboggan slide in the winter. 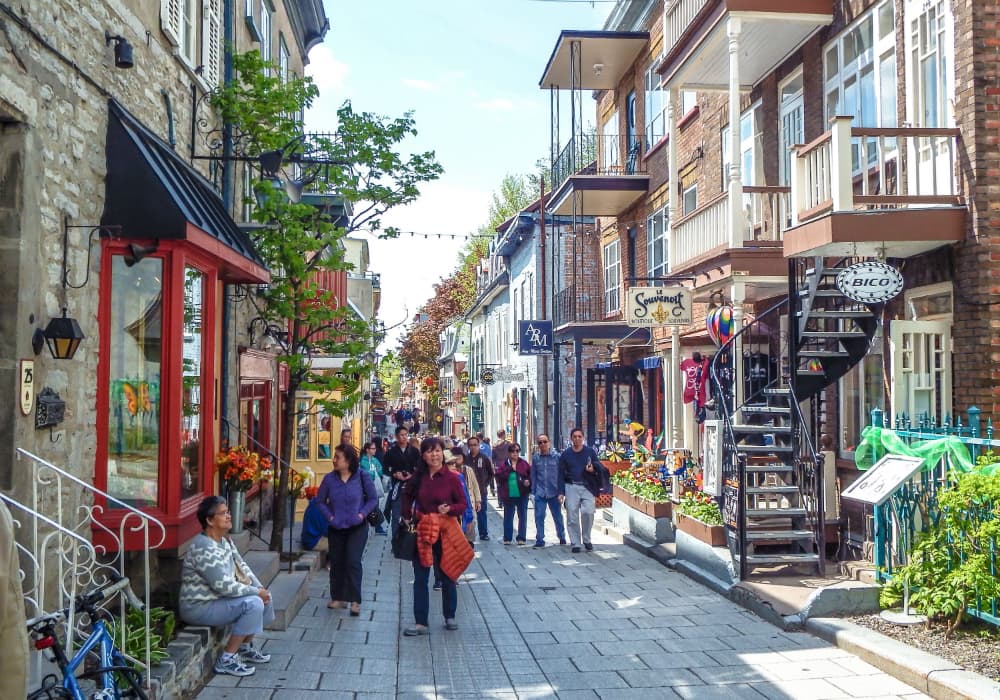 Just below the Château Frontenac and the Dufferin Terrace you’ll find the Petit Champlain district and swear you must’ve crossed over into France at some point. This small neighborhood is home to unique boutiques and sidewalk cafés, quaint shopping streets, art galleries, and historic homes, all situated along the St. Lawrence River and Québec’s first port. You can get to it from the Dufferin Terrace by taking either the short funicular railway or via L’Escalier Casse-Cou, which literally means the Breakneck Stairs. (Don’t let the name deter you—chances are you won’t even break a nail here.)

FORTIFICATIONS OF QUÉBEC & THE CITADEL 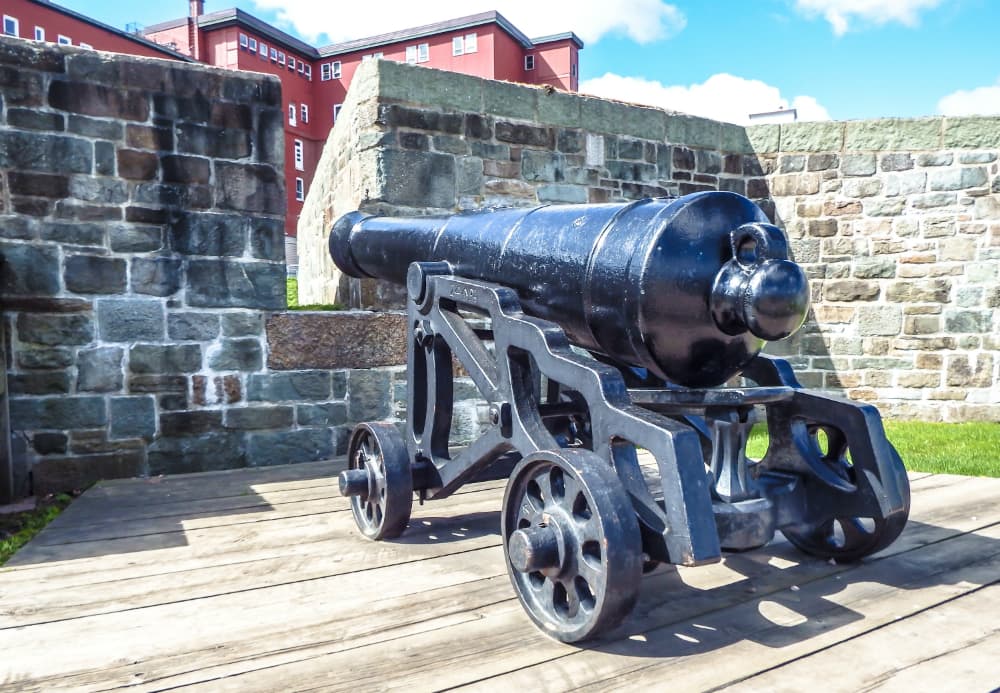 Québec City is the only walled city north of Mexico and evidence of that is everywhere here. Built by the city’s French and British regimes over a period of three centuries, you can now encircle the city by walking along its fortified walls, passing through its many gates and over its many bridges, all while examining up close its seemingly millions of cannons. That’s only a slight exaggeration…

Located within the fortifications is Québec City’s star-shaped Citadel. It was built by the British from 1820-1831, is now a National Historic Site, and has been an active military base since 1920. Visitors can stroll the exterior on their own, tour the interior with a guide, and even check out the daily changing of the guard ceremony (Québec’s only). 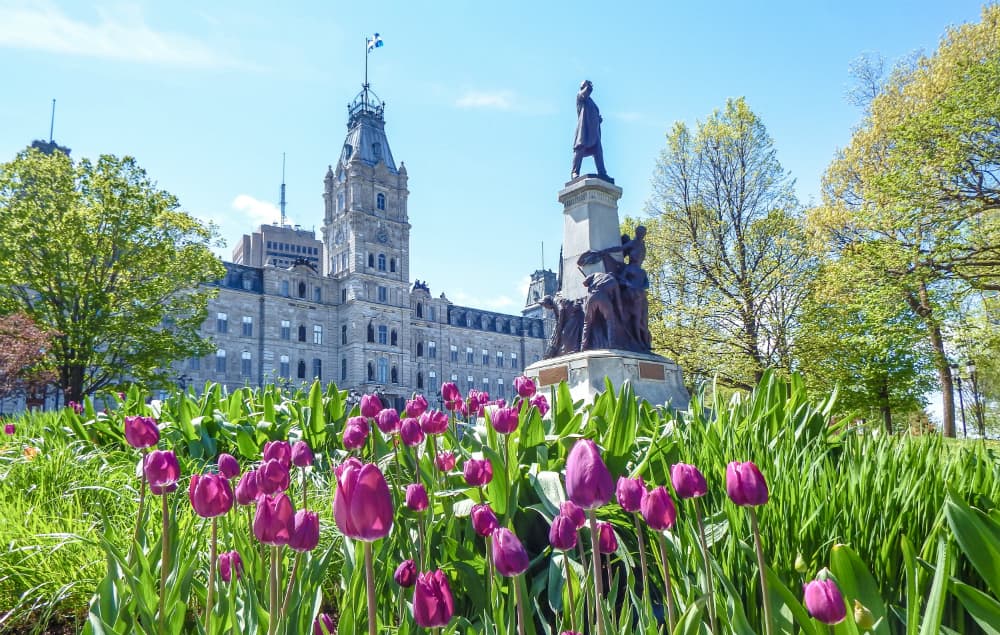 Being both the location of Québec City’s Parliament, where Québec’s National Assembly has convened for the past century, and the start of the Grand Allée, where the city’s most popular bars, restaurants, and dance clubs can be found, Parliament Hill is truly business in the front, party in the back.

Québec City’s Parliament is a grand work of architecture in itself, made even more stunning by the surrounding fountains, sculptures, and colourful gardens. It was the first in Québec to be designated a National Historic Site and was built between 1877 and 1886, with Paris’s Louvre as the inspiration.

THE PLAINS OF ABRAHAM 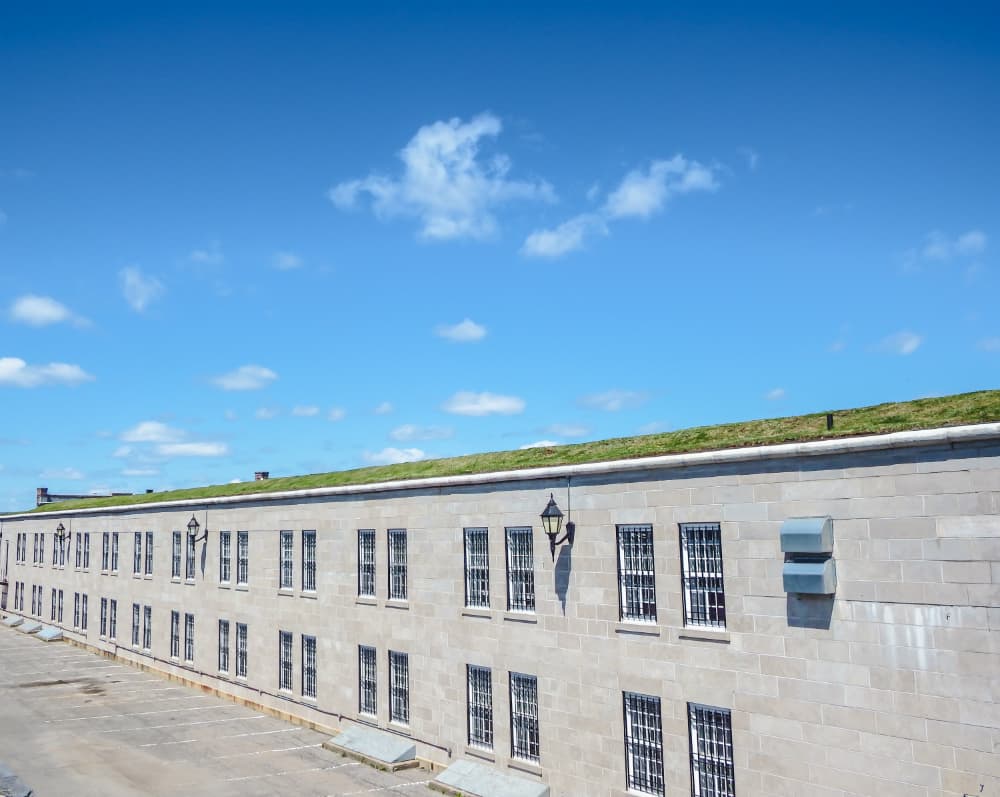 Québec City’s Plains of Abraham was Canada’s first national park and is, by all means, a great place for an afternoon nap. This has been extensively field-tested, pun intended.

The Plains of Abraham is also known as Battlefields Park after the 1759 Battle of the Plains of Abraham between the French and British empires here in North America. This extensive urban park is located just south of the Citadel, running along the hill overlooking the St. Lawrence River. Today, it is the site of one of Québec’s largest outdoor music festivals. 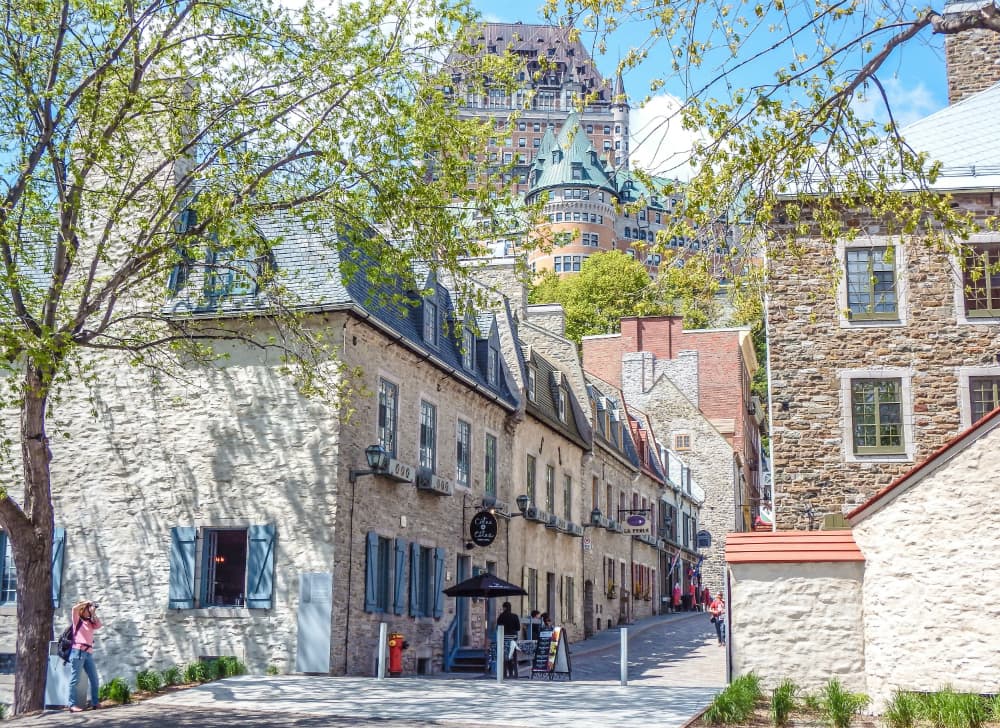 All of the above must-see spots in Québec City are part of an even larger geographical area known as Old Québec. Old Québec was designated a UNESCO World Heritage Site in 1985 and remains North America’s only fortified city. Along with visiting Château Frontenac and the above locations, take time to explore the spaces between each and every one of them. Forego an Uber for a leisurely stroll from one to the next, taking in all the historic art and architecture and bowls of French onion soup wherever possible. 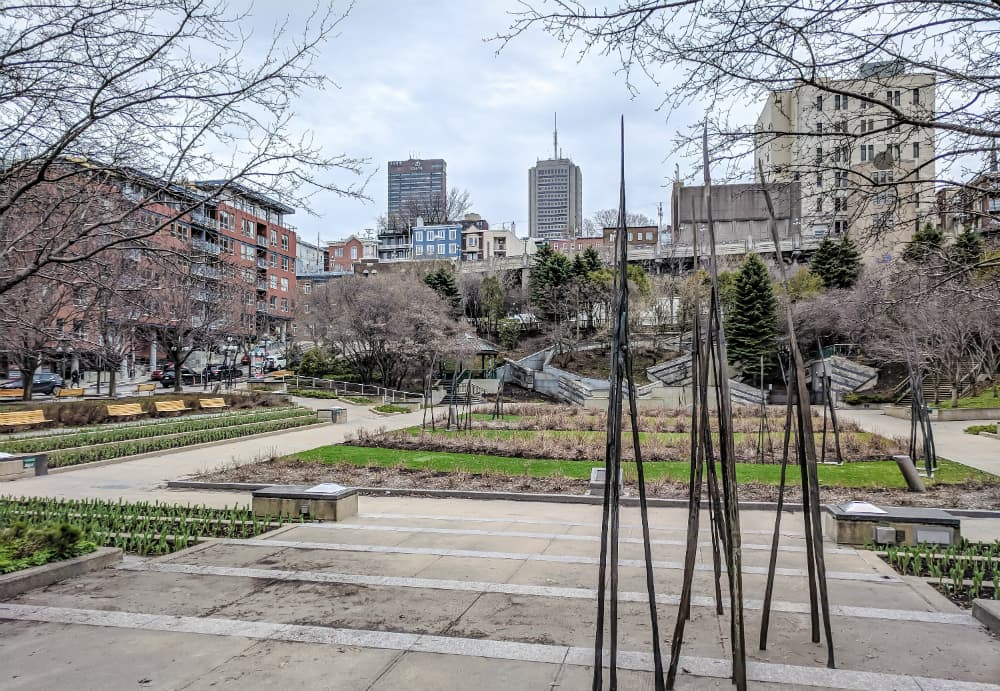 The trendy, up-and-coming downtown district of Saint-Roch is often called the “Brooklyn of Québec City.” It’s been recently redeveloped, is now the “it” neighborhood for artisans, artists, students, and IT workers, and is home to one killer food scene. A day here can be well spent in the newly refurbished was-almost-turned-into-a-highway garden and park, taking a Saint-Roch food tour, checking out the totally legal underpass graffiti, and patronizing the shops of local merchants.

THE ST. LAWRENCE RIVER ITSELF 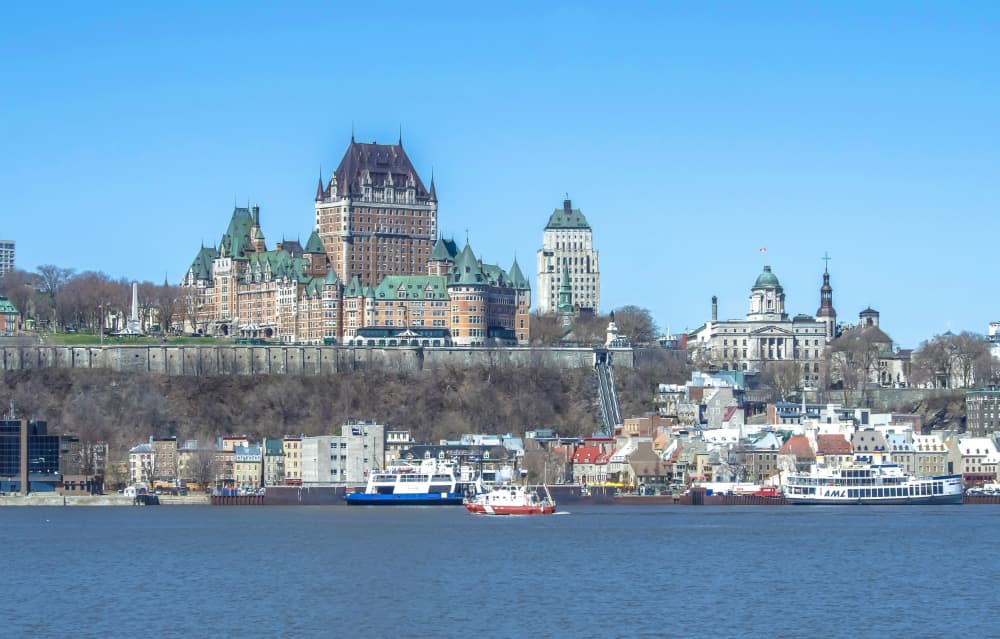 Absolutely, a river can be a must-see spot! Taking the ferry across the St. Lawrence to the town of Lévis and back provides some of the best views of Old Québec. This quick trip costs less than a bowl of poutine and won’t set you back more than an hour. Québec City is best seen both under an early morning sun and after sundown when Château Frontenac and the city of Québec are all lit up. 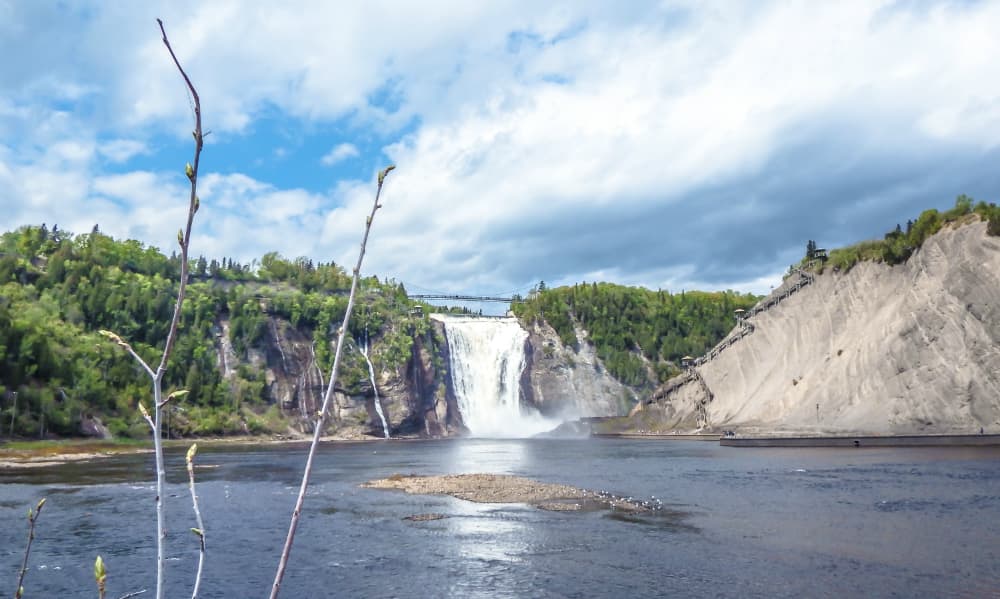 Located just fifteen minutes outside of Old Québec is the area of Montmorency Falls. Here you’ll find—you guessed it—Montmorency Falls, the tallest waterfall in North America at 272 feet (83m). Yes, even taller than Niagara Falls, and by a whole 99 feet to boot! You can climb the steps or take the cable car to the top, walk over and across the falls on a suspension bridge, take a nap in the park (is there a theme developing here?), walk the site’s many trails, or forget using your legs altogether and just take the shortcut via zip line. 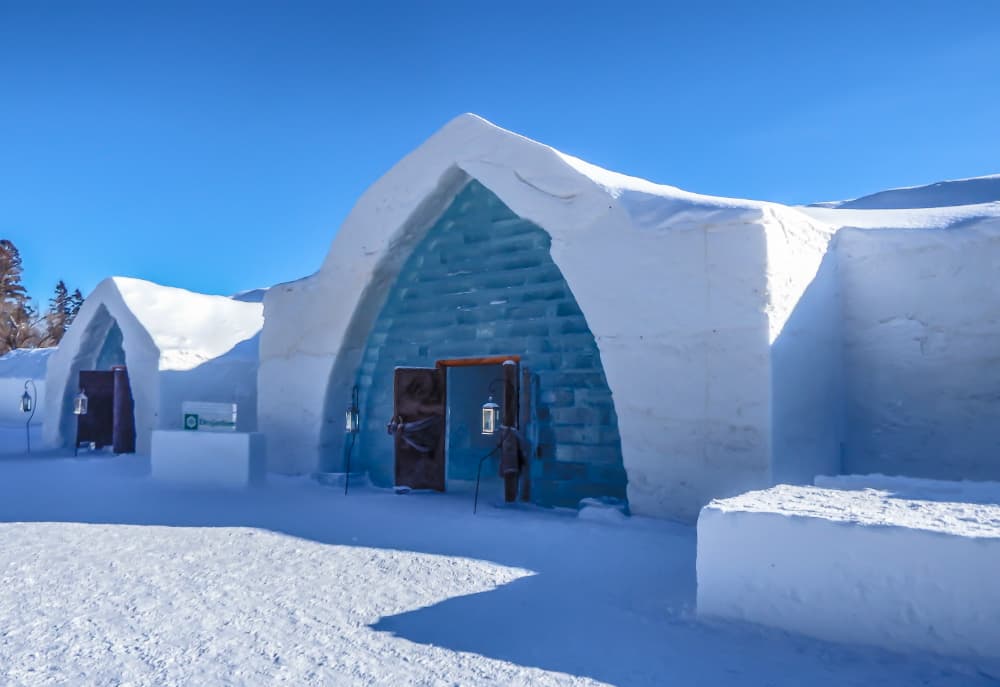 For three short months of the year (January-March) you can visit Hôtel de Glace, the Western Hemisphere’s only ice hotel. You can stay here overnight in rooms constructed entirely of ice and snow; you can play here on the many ice slides and in the many ice bars; or you can simply take one of many guided tours of the temporary property.

Author: Ashley Smith
Ashley Smith is the travel writer and photographer behind My Wanderlusty Life, a blog dedicated to helping busy wanderlusters travel the world on a time-budget. She is based in the Boston area but covers a wide world of quick trip tips and itineraries for real travelers using lighthearted humor (so many puns), practical advice, and personal experiences.

Next post Coast to Coast Wine Tasting in Canada