7 Things to Do in Plateau Mont-Royal, Montreal 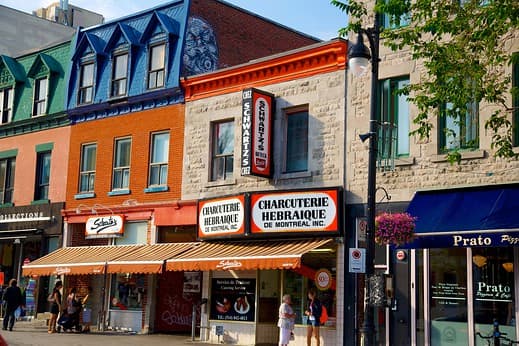 No longer just the “most European city of North America,” Montreal is home to many thriving neighbourhoods that are just waiting to be discovered by visitors who’d like something other than the sights of Old Montreal.

The best example of this rejuvenation is Plateau Mont-Royal; just north of downtown Montreal, it sprawls from the edge of the emblematic mountain to the colourful, picturesque tree-lined streets that have taken over every Montrealer’s Instagram feed. Here are the seven most fun, iconic and memorable things to do in Plateau Mont-Royal, Montreal’s most beloved district.

Rumour has it that Montreal has the second highest amount of restaurants per capita in North America – is that the best reason to wear your eating pants or what? With classics like smoked meat from Schwartz’s to poutine at La Banquise, and with local favorites like Kinoya Izakaya and French bistro Les Héritiers, there really is no reason to skip any meal in Montreal. Don’t forget breakfast – Hof Kelsten bakery and Iranian brunch at Byblos are among the city’s most popular spots.

Play Photographer For a Day

With perfectly aligned rows of houses, colourful windows and twirling iron staircases, Montreal knows how to be sexy for the camera. I would suggest specific areas or streets, but the truth is, the whole of Plateau Mont-Royal is worthy of a snap. But make sure to wander along Boulevard Saint-Laurent for some of the best street art this side of the pond!

The neighbourhood gets its very name from the infamous mountain; it only seems fair that visitors should want to indulge in one of the most popular things to do in Plateau Mont-Royal – make their way up to admire the view, right? Indeed, having lookout points on two of its sides, Mont-Royal offers splendid panoramas of the eastern portion of the city and the shiny, pointy skyscrapers of downtown. Lazier travellers will find comfort in the fact that there is a bus service to the mountain top from Mont-Royal métro station – you’re welcome!

Being home to a relatively young crowd, Plateau Mont-Royal is blessed with some of the city’s best flair bars, microbreweries and pubs. Whether you want to sample the local brews (Dieu du Ciel or HELM), discover inspired cocktails (Le Lab or Baldwin Barmacie) or just relax and unwind (Buvette Chez Simone or Maison Publique), you can be sure to find it in Montreal’s busiest, yet most charming, district.

Hang Out With the Hipsters

Mile End is the official capital of the Montreal hipster crowd. Located in the western portion of Plateau Mont-Royal, this subdivision is where visitors will find most bearded men, start up offices and vintage record shops. An excellent people watching spot if there ever was one, Mile End also has unmissable photo opportunities, world-class street art and a delectable drink/food scene that would make any other city jealous.

Shop ‘Til You Drop

One of the longest shopping streets in North America, Boulevard Saint-Laurent has long been regarded as the most exciting shopping destinations in the city, especially between Bernard and Prince-Arthur streets. Some of the local favorites include home decor V de V, ladies-only Unicorn and 1861, grown-man approved Frank & Oak (although this is just around the corner from Saint-Laurent) and, of course, the dozens of vintage shops scattered along the way. Put on your shopping shoes!

Get Your Java Fix

Travelling solely to try out new coffee shops is something more and more 20-somethings do nowadays, and Montreal certainly hasn’t missed the memo. With seemingly one or two new coffee shops opening up every week, even Montrealers have a hard time keeping track! My favorites however remain Café Odessa, Oui Mais Non, Le moineau masqué, Café Névé and Myriade.

Which one of these options will be on your future Montreal itinerary?