A Traveler’s Guide to Vancouver Neighbourhoods

You’ve landed in Hollywood North. You’re either ready to party or interested in a vacation full of organic eats and vintage shops. Or maybe a bit of both? Vancouver is a big city that hasn’t forgotten how to breathe in some fresh air. When Lil Jon screams “Turn down for what?” from a club in Gastown, outer Vancouver responds with “Because sometimes a quiet afternoon tea is nice.” Experience the best of both worlds during your vacation when you stop by a few of these Vancouver neighbourhoods.

Pack your bags @ExpediaCA has identified the best of the best Vancouver neighbourhoods #TourVanCity http://bit.ly/1SSUfz0 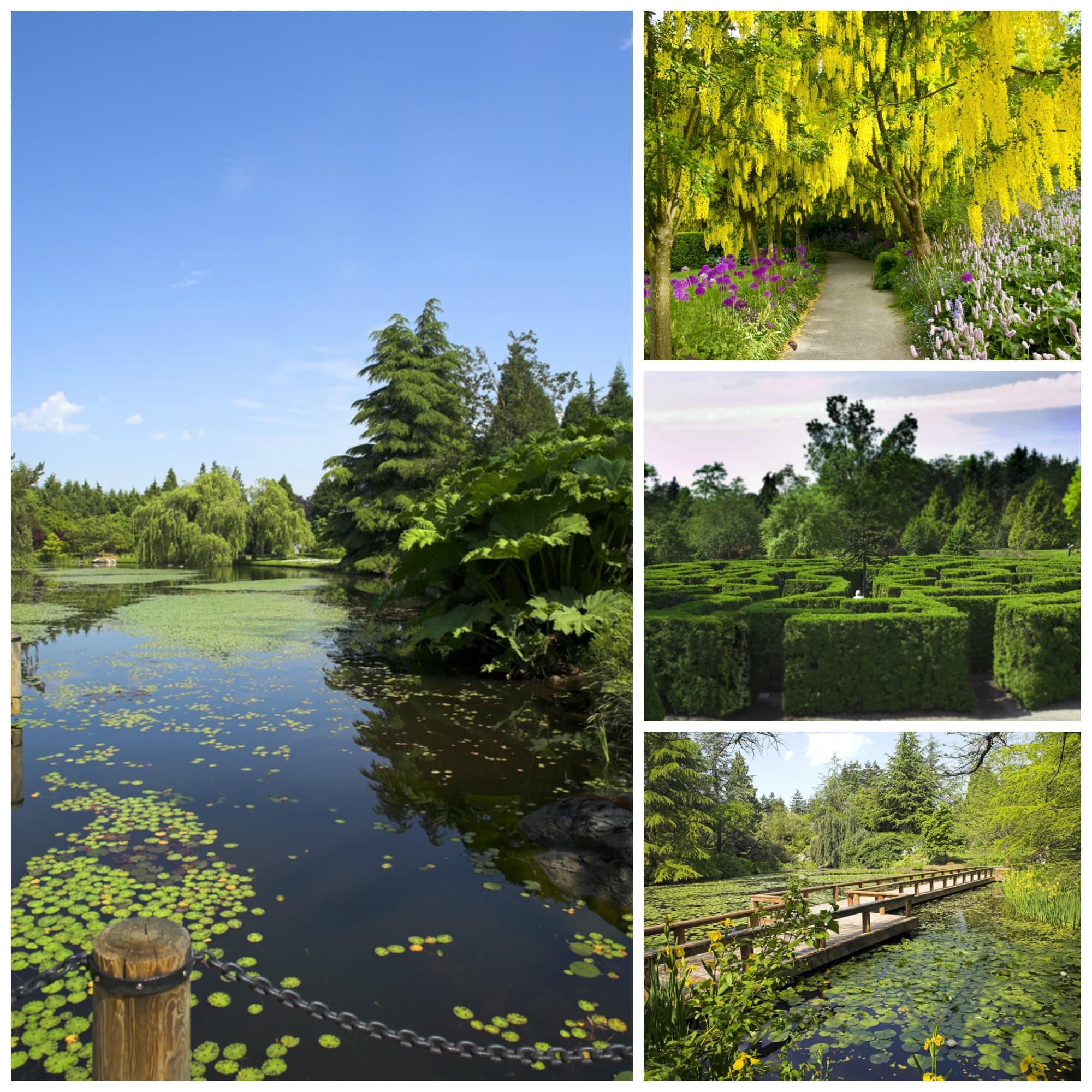 So you want to daydream about the good life while you’re on vacation? A slow meander through either of these neighbourhoods is the best way to set sights on the type of home you’re known to pin to your carefully curated “Dream Home” board. Arbutus Ridge has a boatload of restored heritage houses and views of nearby North Shore Mountains. Shaughnessy also has beautiful historic homes, but we encourage you to stop by the VanDusen Botanical Garden during your visit. 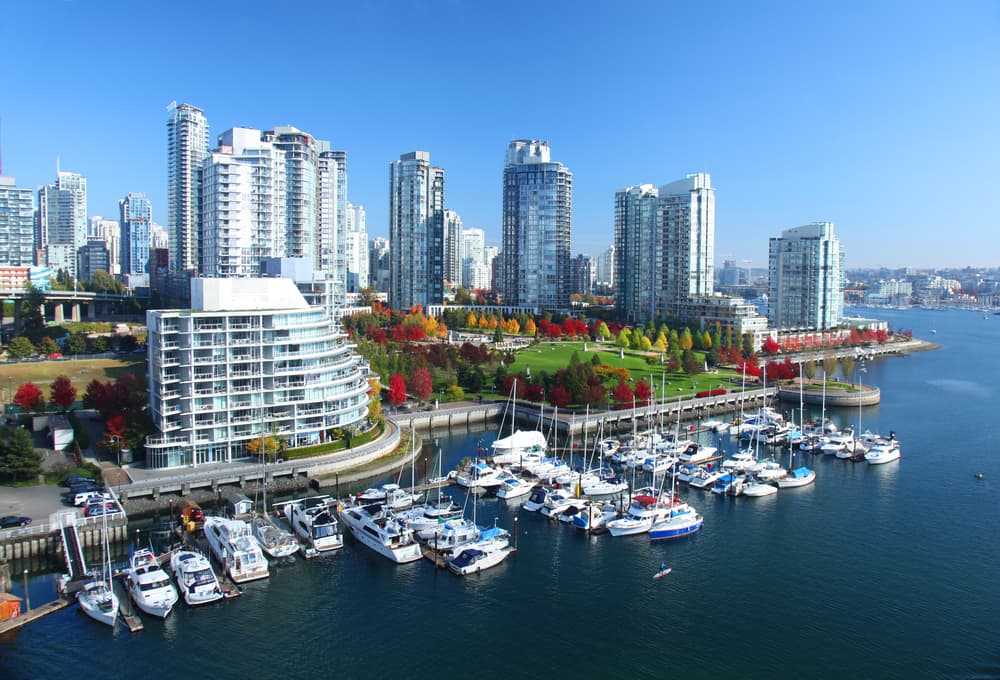 Take a walk along the marina in this northwestern Vancouver neighbourhood, and before you know it you’ll be counting boats in the water instead of email notifications on your phone. The name Coal Harbour might suggest this area is only for seafarers, but if your middle name is landlubber you can still have fun (also, what were your parent’s thinking?). Go for a run on the seawall, or stop by Stanley Park and picnic by the water. Coal Harbour also has a community centre designed by Winnipeg native and award-winning architect Gregory Henriquez — check it out! 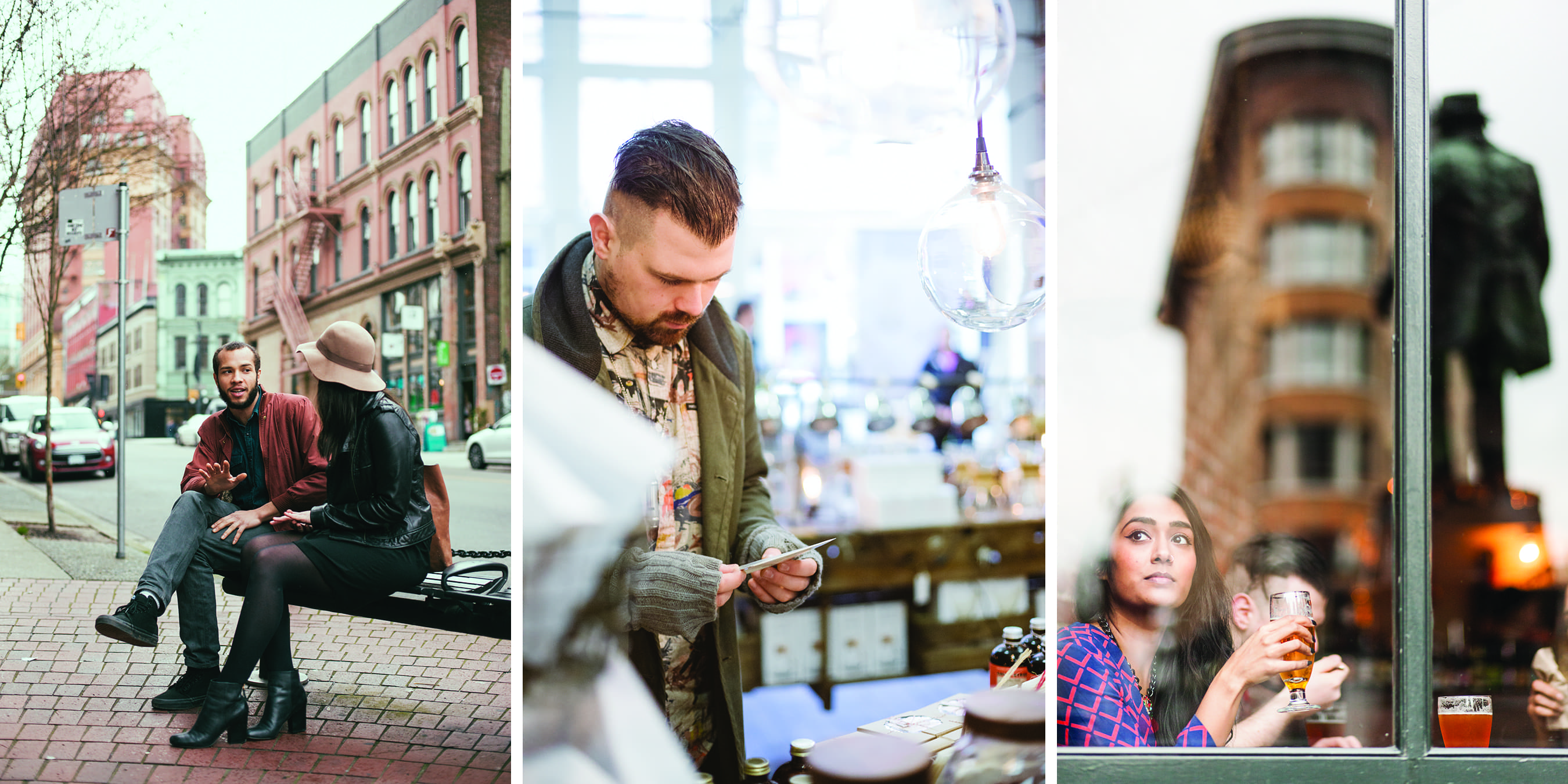 Downtown is, surprise, surprise, Vancouver’s busiest neighbourhood as far as lots of folks are concerned. Take a new Facebook profile pic in front of the Olympic Cauldron, then enjoy a harbour walk before you trek over to Granville Street. The shops here put the fun in funky. If you’re feeling the “treat yourself” vibe, maybe Alberni Street is the best place to put your new credit card to work, because the upscale shops here are nothing if not a good place to make some investment purchases. Have a patio lunch in Yaletown, then head for drinks in the Gastown historic district. End your day at a Canucks Game at Rogers Arena – the most convenient and easy to access NHL arena in Canada.

“As old as Canada itself, Gastown was Vancouver’s first neighbourhood. Best explored on foot, it’s character-rich spaces in turn of the century buildings house independent boutiques, curated décor shops, one-of-a-kind galleries, and some of the best culinary fare in the city.” – Pam Sanders of Gastown.org 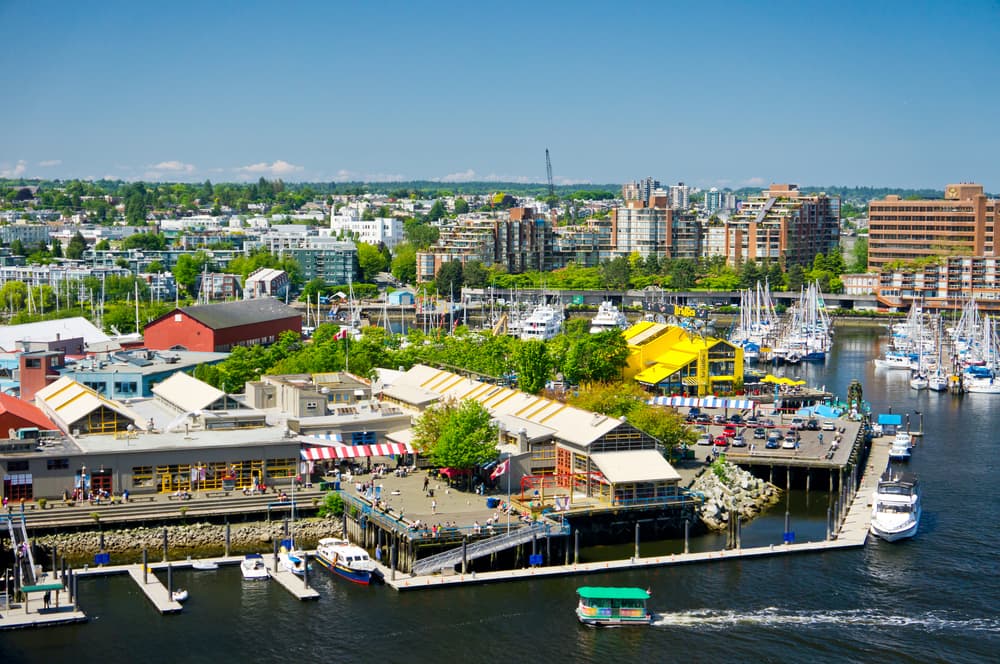 Foodies, are you listening? Put down that fork long enough to book your hotel in Granville Island. This Vancouver destination means business when it promises other neighbourhoods can eat their hearts out. Meanwhile, you’ll be sipping on artisan sake in the Railspur District and chowing down on fish and chips at the Public Market. Wash it all down at one of the two local breweries. 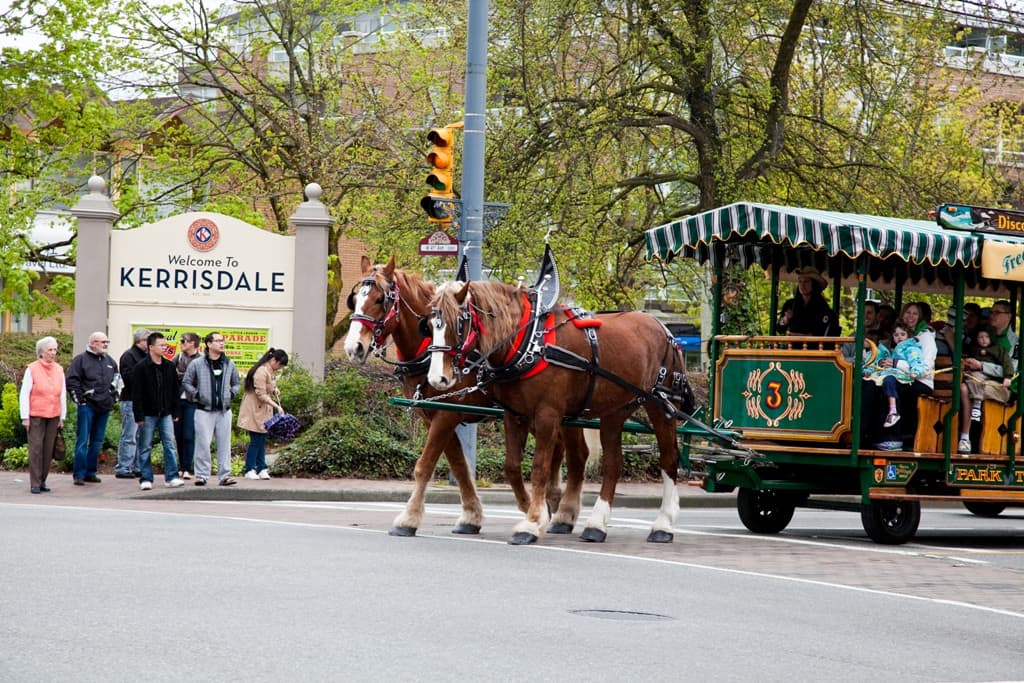 After a night out in Yaletown or the downtown Entertainment District, a walk on the mild side might sound pretty nice. Head to Kerrisdale, grab a cup of coffee and do some light shopping at Kerrisdale Village. This neighbourhood is also a great place to have a proper afternoon English tea (pinkies up) and nibble on some artisan cheese or support a local bakery. 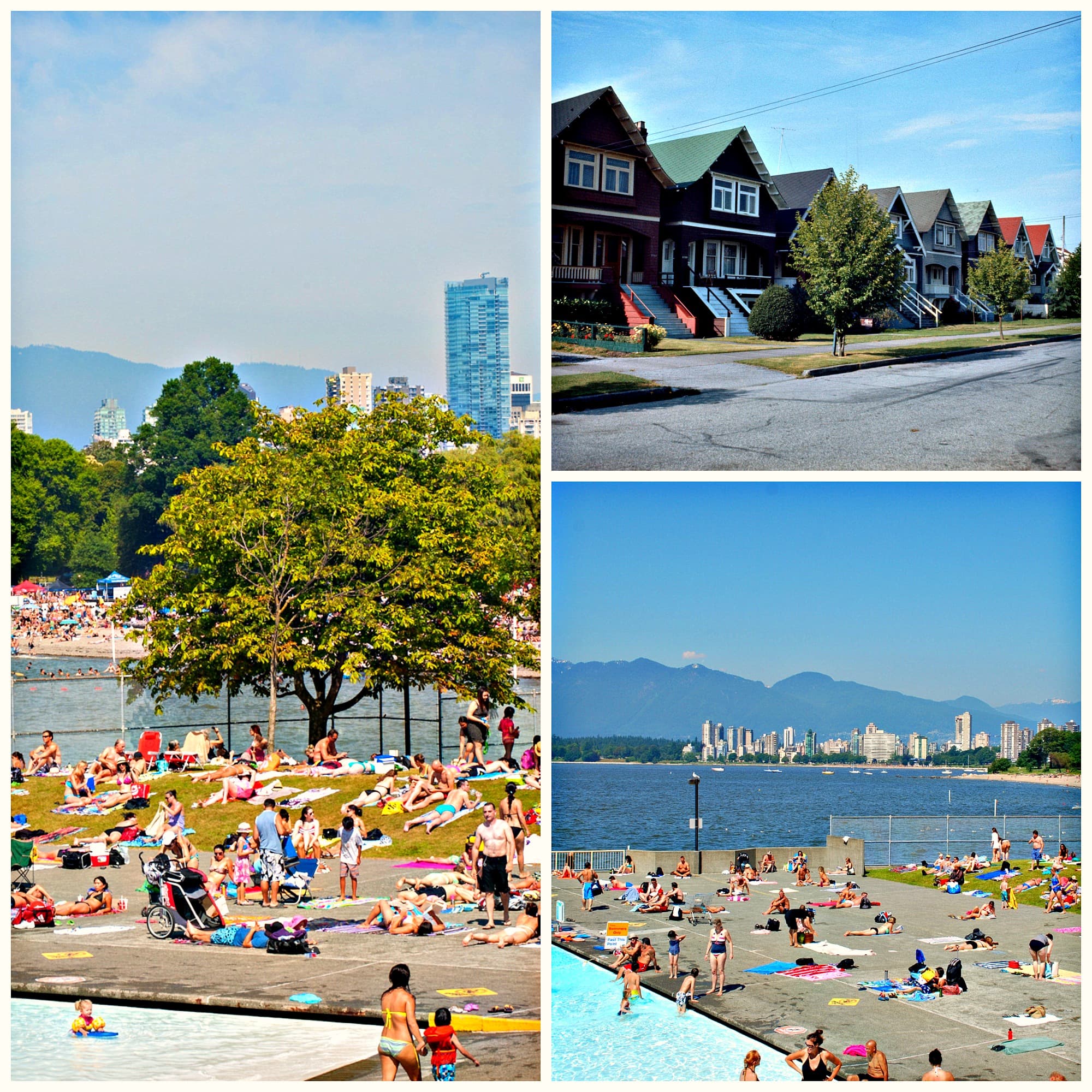 A trip to Vancouver without a stop at Kits Beach is like making your way to New York City without getting your peepers on the Empire State Building. Grab dinner to go and create a sunset picnic on the sand, or take a walk along the beach and then retreat to a restaurant patio. With more than a dozen parks, including Vanier Park, and a zero-waste pop-up grocery store…Kitsilano is about as green and hip as they come.

“We’ve mellowed into a tightly knit beach community of students, yopros, families, and seniors. We’re united by our love of Kitsilano’s perks: excellent restaurants/shopping, and outdoor exercise with a backdrop of shimmering seafront, mountains, and downtown Vancouver.” – Taraneh Jerven of Kitsilano.com 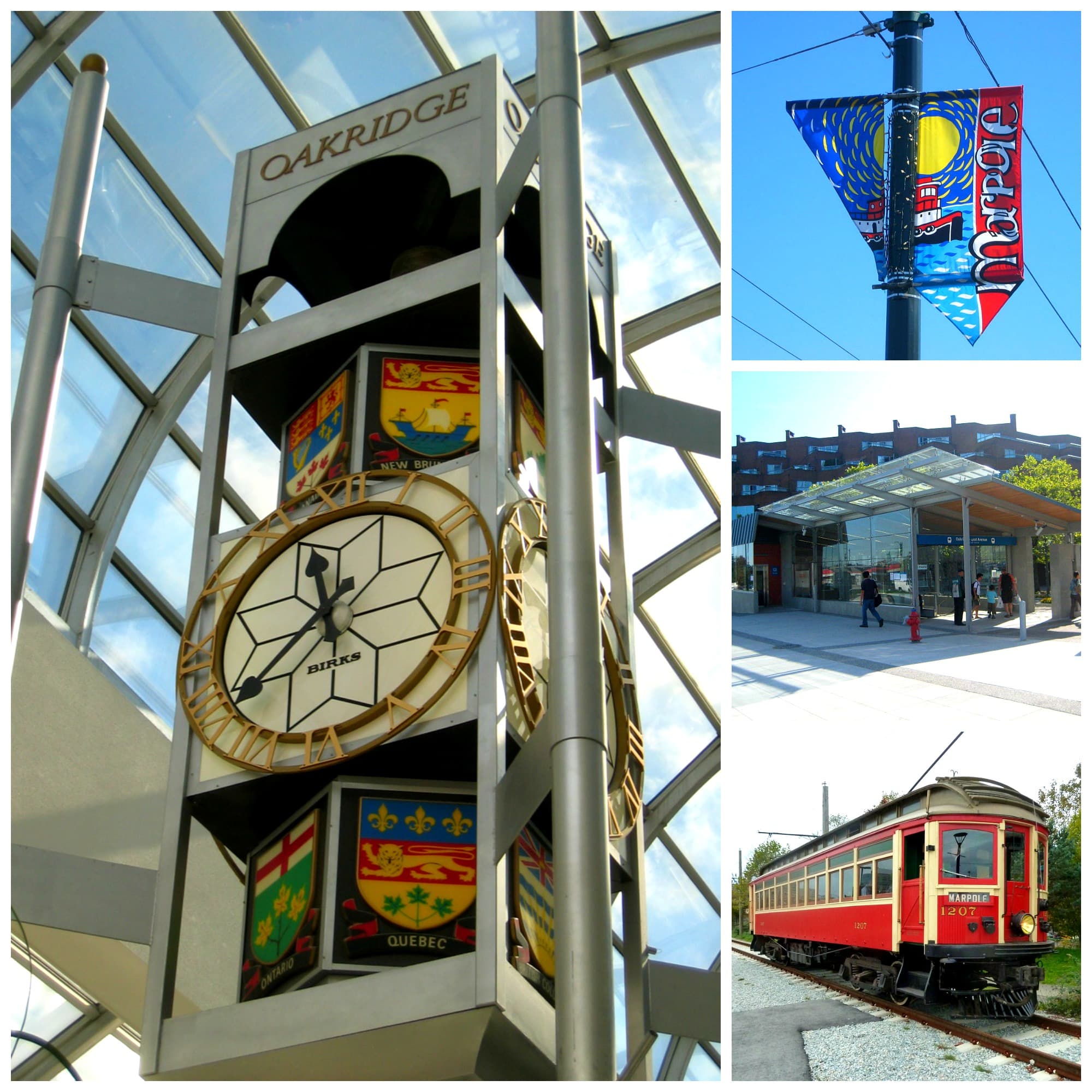 These residential neighbourhoods are in southwest Vancouver. Marpole is steeped in history, while Oakridge is one of the city’s newest hoods. Shop along Granville Street, meander through Marpole Park, and check out the newest shops in Oakridge. Small businesses here include coffee shops and tea houses, so stop for a sip and plan your next adventure in Vancouver. 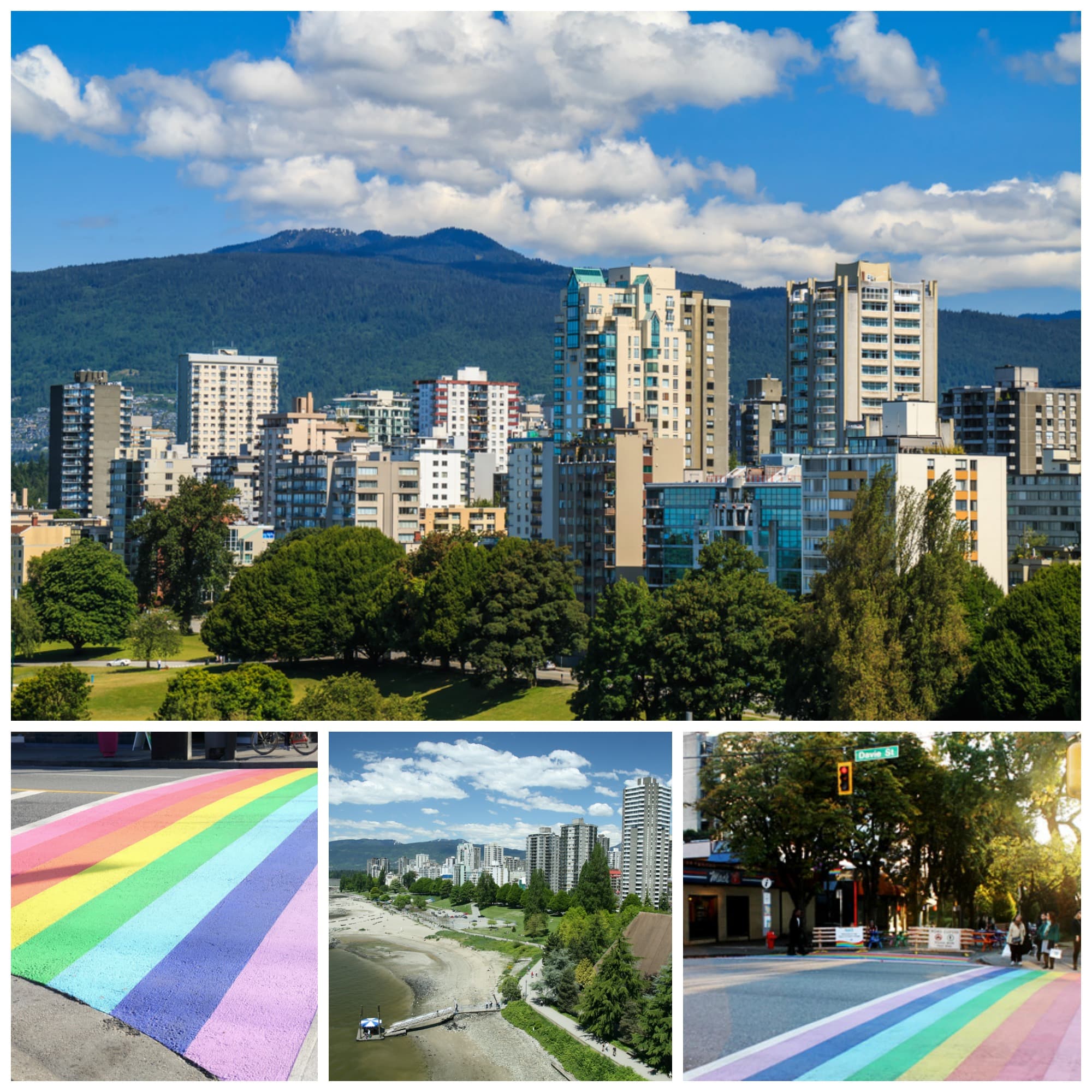 The West End is on peninsular Vancouver, and sends out a siren song to anyone who wants to pull an all-nighter or let loose for a few hours. What happens in the West End only leaves the West End if you put it on Instagram. The neighbourhood has water on three sides, though you’re more likely to be swimming in restaurant options than dipping your toe in English Bay. Davie Village is here, which is the city’s most gay-friendly district. Take your pic on the rainbow crosswalk before you treat yourself to a fancy meal at Denman Street or a bowl of hot ramen on Robson Street.

“The Davie Village is a diverse, welcoming neighbourhood in the heart of Downtown Vancouver and offers a one-of-a-kind experience to visitors and locals alike. Experience the rich history, award-winning dining, and friendly community of Canada’s most prominent west coast LGBT/gay-friendly community.” – Nathan Caroyannis, Community Manager at DavieVillage.ca Despite its name, you won’t feel grey (or blue, for that matter) during your time in this Vancouver hood. In fact, watching a technicolour sunset at Spanish Banks or Jericho Beach might just be the highlight of your time in BC. If someone here tells you to “Go fly a kite,” don’t take it the wrong way. They probably just want you to take advantage of the blue skies and friendly winds at Locarno Beach. Stroll through Point Grey Village to take a look-see at what the independent shops here have in store. 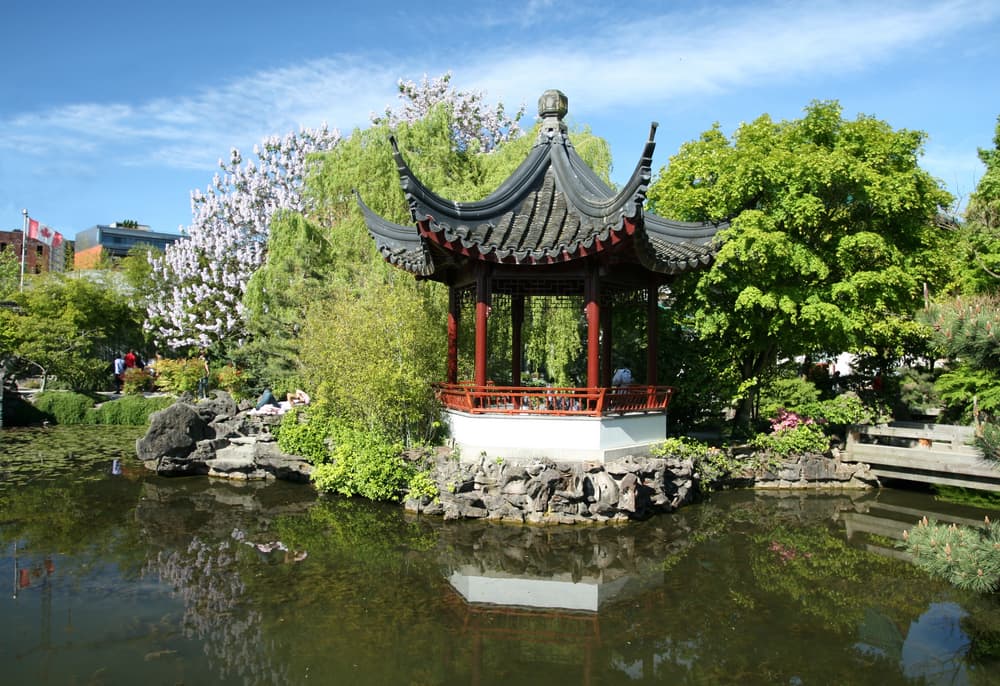 This is Vancouver’s oldest residential area, lined with colourful row houses and full of diversity. You’ll find characters of all ages playing in MacLean Park on a quiet Saturday afternoon, and the locals are happy to talk to you about why they love it here. Along the western boundary of Strathcona begins Vancouver’s Chinatown. Here you will linger in the Classical Chinese Garden, visit a traditional tea house, and then eat so much dim sum they’ll have to roll you home. No regrets. 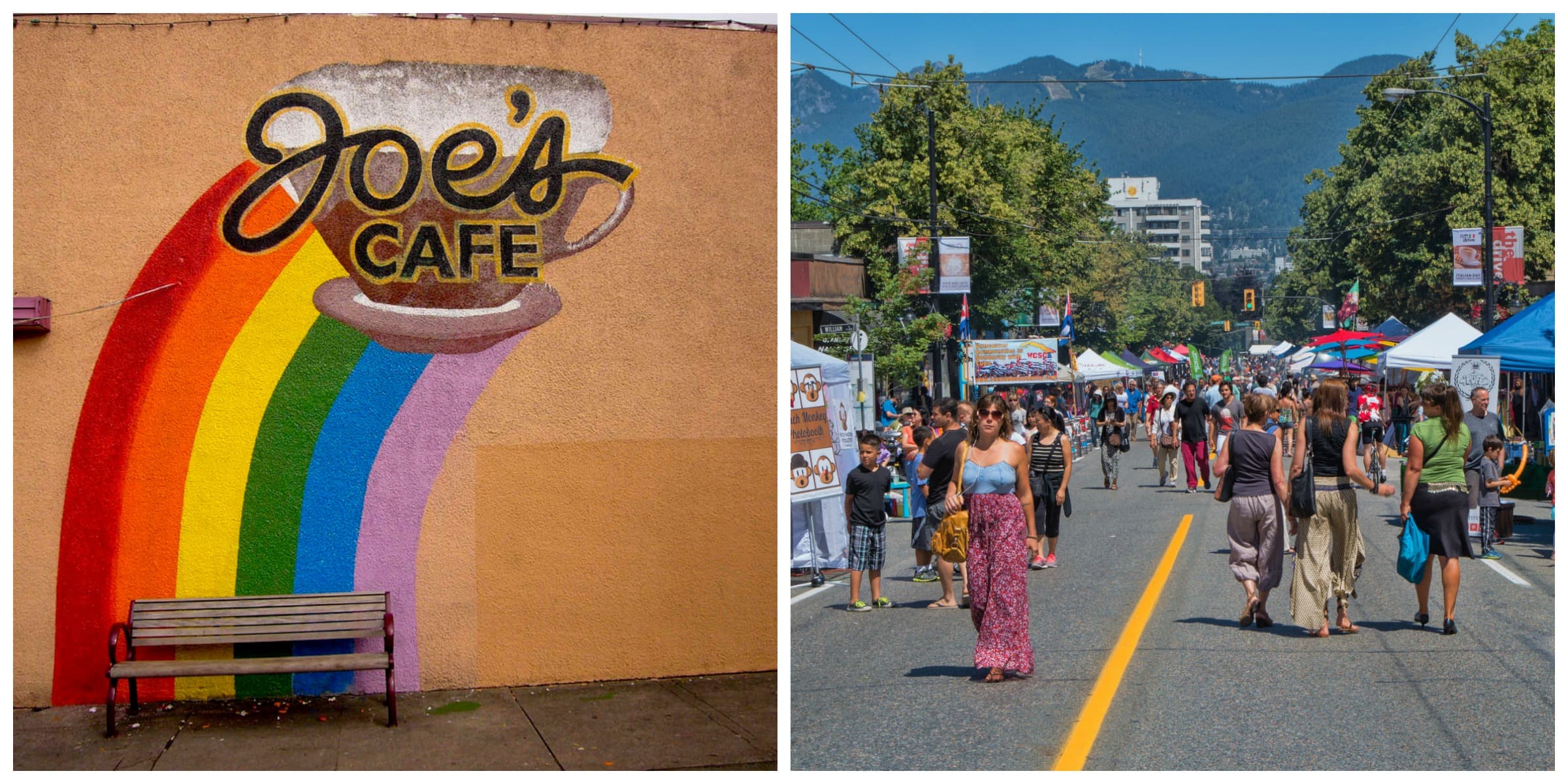 Vancouverites lovingly call this neighbourhood simply The Drive. We’re not saying it gives Haight-Ashbury a run for its money, but we are saying the area never met an organic grocer or Euro café that it didn’t like. And you’re bound to fall in love with them, too. Try cuisine from around the world, celebrate car-free days on Friday during summer months, and catch some live music. Commercial Drive is also home to Italian Day on the Drive each June, when you can celebrate all things Italia. 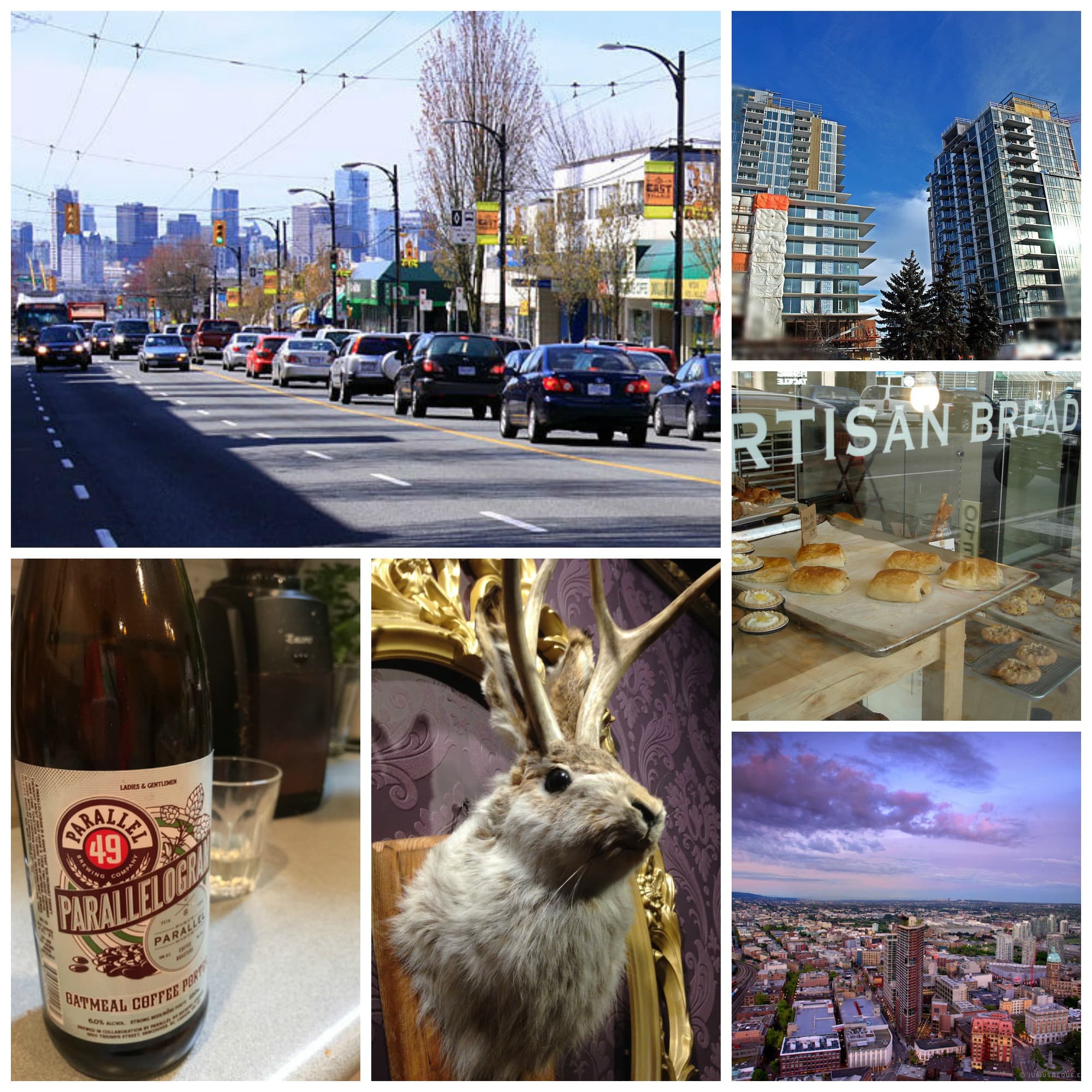 East Village is burrowed in Hastings-Sunrise, a neighbourhood with die-hard fans and a storied past. All you really need to know is that as of right now, East Village is having a pretty great moment. New condos are going in, hip new restaurants are cropping up like dandelions in spring, and heritage storefronts are seeing new life. Most of the commercial energy is along East Hastings Street, but dotting the landscape in East Village is everything from wine bars with tequila tastings to fish and chips joints. 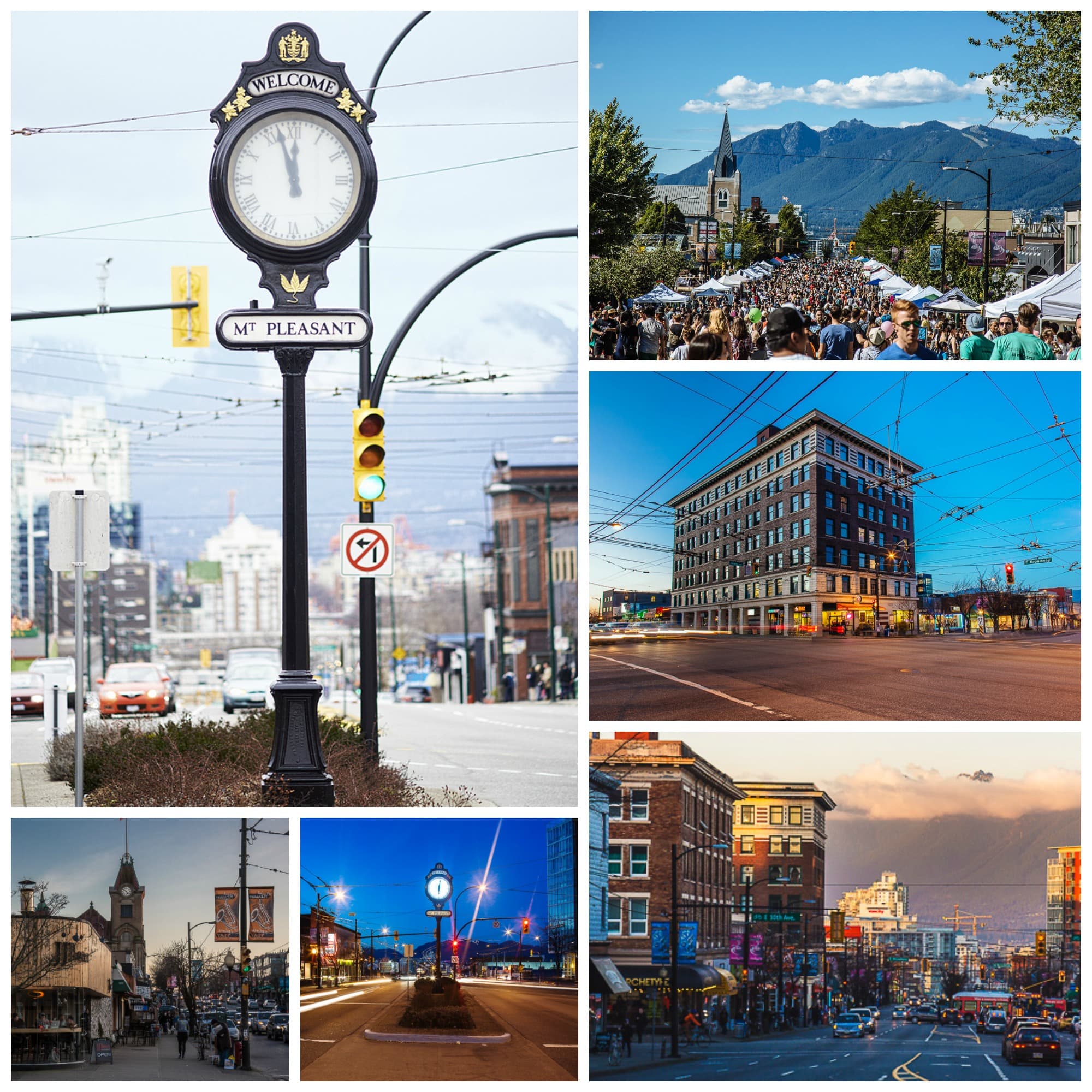 Mount Pleasant is the kind of hood where you spot community murals to your right and notice a flock of cyclists on the other side of the street. The area is eclectic, buzzing, and full of an artistic spirit that screams “Sign me up for a wine and paint event.” If unusual stores and chic boutiques are your beacons on the horizon, then point your ship toward Mount Pleasant. Eat a plate of authentic linguine or check out a healthy fast food joint while you’re in the Renfrew-Collingwood area. No, really, healthy and fast food isn’t an oxymoron here. After a quick stroll down some tree-lined streets, we recommend you take advantage of the neighbourhood’s access to nature. Renfrew Ravine Park has a bubbling creek that might inspire you to turn poet for the day.

“A historic residential neighbourhood tucked away on the eastern edge of Vancouver. It’s a special place where people of diverse cultures—pioneers and newcomers, young and old—live together in harmony. The neighbourhood is home to hidden gems, from unexpected sweeping mountain views and an urban forest to one of the oldest schoolhouses in Vancouver. Walking or cycling is a great way to discover the neighbourhood.” – Julie Cheng, editor of the Renfrew-Collingwood Community News

Have we convinced you to start planning your trip to Vancouver? Check out these helpful resources to get you going:
Vancouver Hotels
Vancouver Travel Guide
36 Hours in Vancouver – Itinerary