The 5 Best Burgers Joints in America

If summer had a favourite meal, it would be a hamburger. Grilled at parties, picked up on the way to the movies, indulged in after long afternoons at work—there is no bad time to have a hamburger. This season, test out some of the best burgers in their homeland: America. 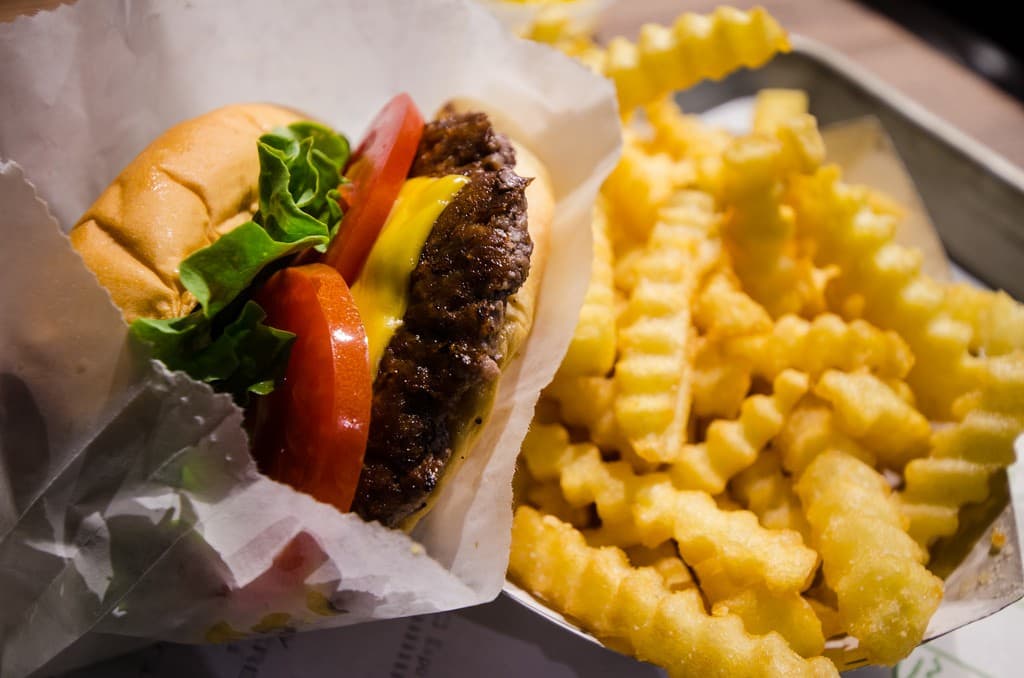 Considered the East Coast rival of In-N-Out, Shake Shack is one of the fastest growing burger chains in the country. In 2004, Shake Shack opened its first permanent kiosk. In the ten years since, it has seen a loyal fan following that seems to grow faster than the “Orange is the New Black” cast roster. Maybe it’s the delicious meat, maybe it’s the fresh produce, maybe it’s the frozen custard desserts–Whatever it is, the obsession continues to shake up the east side of the country.

What do you get when you pair locally sourced beef with house mayo and homemade pickles? Perfection. The Company Burger is such a shining star, the New Orleans restaurant is named after it. This meaty masterpiece doesn’t mess around. It’s made with two patties and two slices of American cheese, plus red onions and freshly sliced pickles, all sandwiched between two house-made buns. The hand-cut, double fried French fries aren’t anything to sniff at either. Feel like a boss every time you eat at the Company Burger. 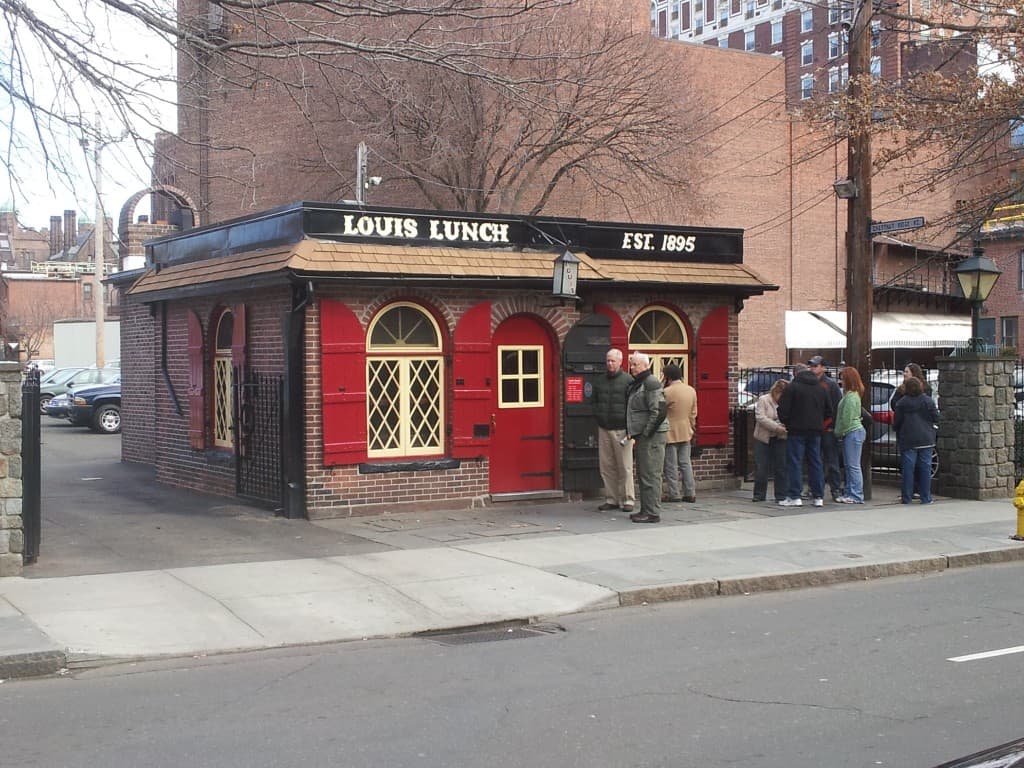 Not only is Louis’ Lunch considered to be the first restaurant to serve hamburgers, it’s also the oldest burger shop still in operation. One day in 1900, or so the story goes, a customer in a rush desperately needed a hearty meal. Louis put some meat inside two buns and started a tradition. Today, the hamburgers are still cooked in 19th century cast iron gas stoves, with the “buns” (which are toast slices, the original way) crisped in a 1928 toaster. The meat is a blend of five different cuts, and the restaurant uses a sharp cheese spread instead of slices like many present-day hamburger diners. Once you get your sandwich, don’t bother asking for no stinkin’ ketchup or mustard. The only toppings allowed at Louis’ Lunch are tomatoes and onions.

It’s common knowledge that it’s hard to impress New Yorkers. Perhaps that’s why so many Big Apple restaurants opt for razzle dazzle presentation and hipster lighting instead of quality food. Petey’s Burger does the polar opposite and gives it to the people straight. Their burgers include thick meat, melted cheese, robust bacon, and flat buns that have a nice crunch on the outside and soft heat on the inside. You can leave those big apples at home and enjoy a big burger instead. 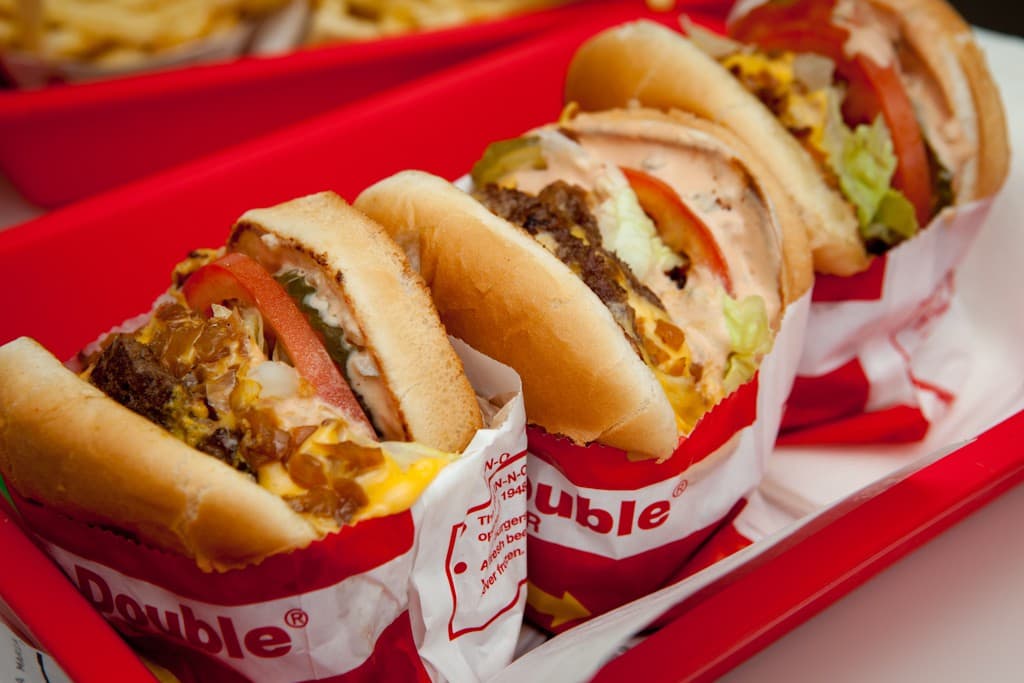 Like a beacon of light, the In-N-Out sign is a guide to the promised land of delicious meat. The animal style fries. The cheeseburgers. The shakes. In-N-Out is known for it all. While it may be a chain restaurant, its fans are famous. Chef and travel personality Anthony Bourdain calls it his favourite restaurant in LA, renowned chef Thomas Keller is a proud customer, and the late great chef Julia Child supposedly knew where every In-N-Out Burger was located between Santa Barbara and San Francisco. Part of the reason In-N-Out has such a rabid following is the ingredients. The meat is never frozen, the freshest picked lettuce is used, the bun has a nice crunch, and the potatoes are sliced fresh before high diving into the deep fryer. It’s heaven.

This summer, don’t settle for anything less than a big, meaty mountain on the plate in front of you. We’ll see you by the ketchup counter.

What’s your favourite burger in America?