With roaring fans, breakneck action, and glittering trophies, hockey is the ultimate sport. The best part? There are dozens of towns throughout North America that live and breathe hockey. Chosen for their connection to this iconic pastime, either through deep history, loyal fans, contributions to the sport, or all the above, these places epitomize hockey season. Here’s our list—in no particular order—of the top 22 hockey towns in North America. 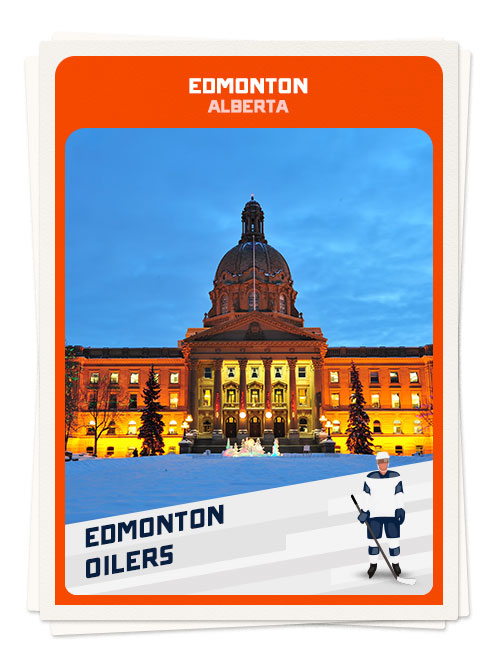 When you think of hockey in Canada, Edmonton comes to mind. This is Edmonton Oilers country, and hockey is everywhere you look. Aside from the Oilers, there are the Knights of Columbus, Edmonton Oil Kings, and the University of Alberta Golden Bears and Pandas, which have had more University Cup wins than any other school. Looking for a place to pop some champagne after a winning game? Central Social Hall knows how to celebrate in style. 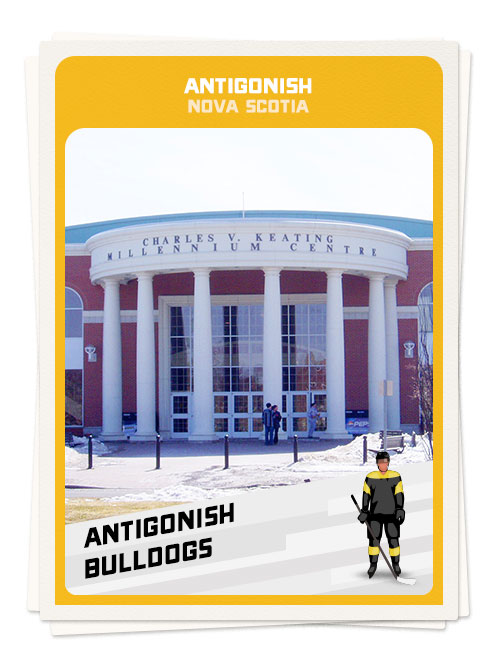 Without question, Antigonish has one of the best universities for hockey in Canada. Home to St. Francis Xavier University hockey teams, the X-Men and X-Women, this town guarantees full stands each home game. Enthusiasm isn’t relegated to the university, however. There’s also the Antigonish Bulldogs, which bring the heat each match. And for the young ones, there’s the Highland Edge Hockey Academy, which specializes in teaching power skating, puck control, and shooting. 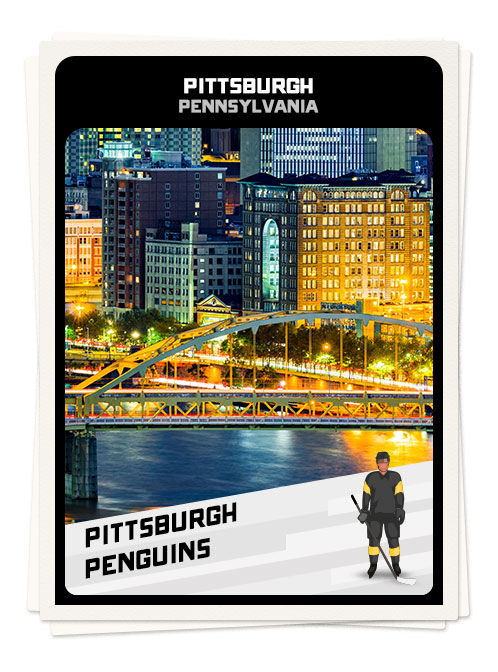 Pittsburgh is all about street cred, and it more than earns it for hockey. In fact, Pittsburgh opened its first indoor ice rink back in 1899. These days, Steel City is known for the dominant Pittsburgh Penguins NHL team, as well as the Pittsburgh Vengeance Hockey junior team. Hungry after the game? Go to the Strip District for local favourites like Primanti Brothers for an Almost Famous® sandwich, or Gaucho Parrilla Argentina for woodfired fare. And don’t leave town before heading to nearby Western Pennsylvania Sports Museum to peruse memorabilia from the greatest players in Penguins history. 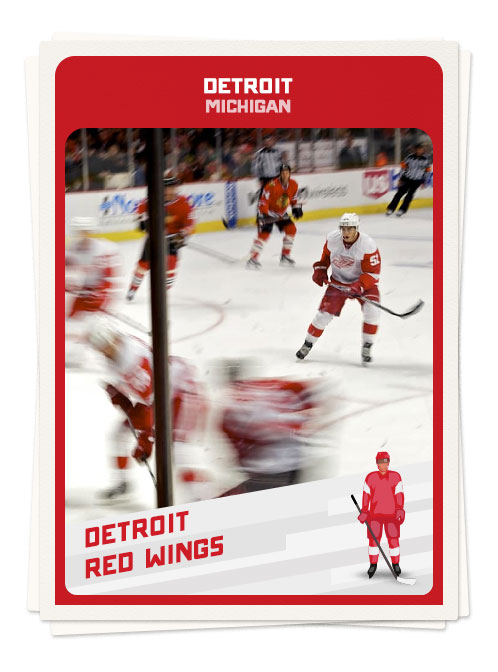 When you talk about hockey legacy, you mean Detroit. The city’s team, the Detroit Red Wings, have the third-highest number of Stanley Cup victories in the league. If you attend a playoff game, look out for flying octopuses. It’s a tradition to hurl dead cephalopods on the ice for good luck. If you’re catching the game from a bar stool, head to Ciccarelli’s 22, which has over 40 big-screen TVs and is owned by Dino Ciccarelli, a Hall of Famer. 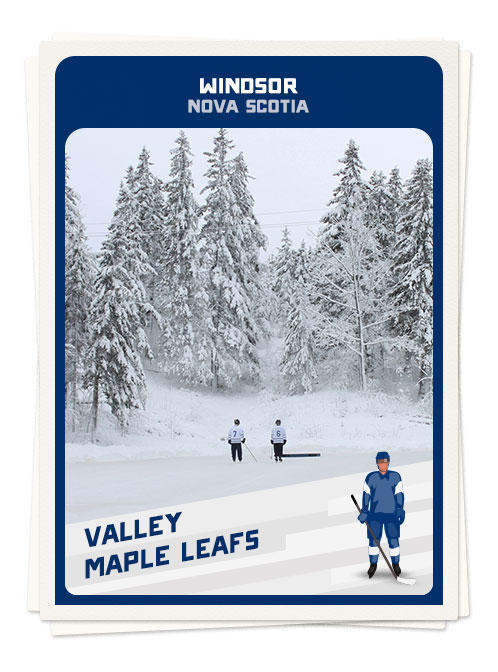 It’s been called “the birthplace of hockey”—though the history of ice hockey in Canada is a contested issue. The first written reference of the sport recounts a game of hurley on a frozen pond in Windsor, Nova Scotia. Today, the town is still proud of its past, as showcased at the Hockey Heritage Museum. If you want to see how the game is played right, make your travel plans around the Long Pond Heritage Hockey Classic, where hockey history meets hockey present. Or head to Hants County Arena to show your support for the Valley Maple Leafs and get in the local spirit. 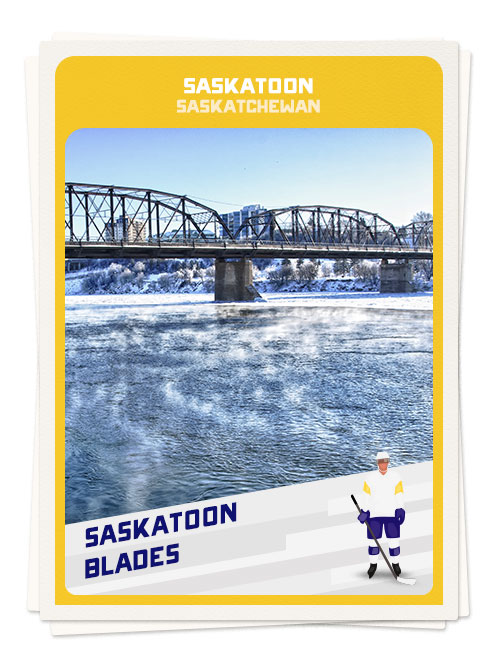 Here’s something impressive to mention at your next dinner party: Saskatchewan has produced more NHL players than any other province. Saskatoon was even the home of “Mr. Hockey” himself, Gordie Howe. Watch future stars when you attend a Saskatoon Blades game and see why ice hockey in Canada owes a lot to this enthusiastic town. 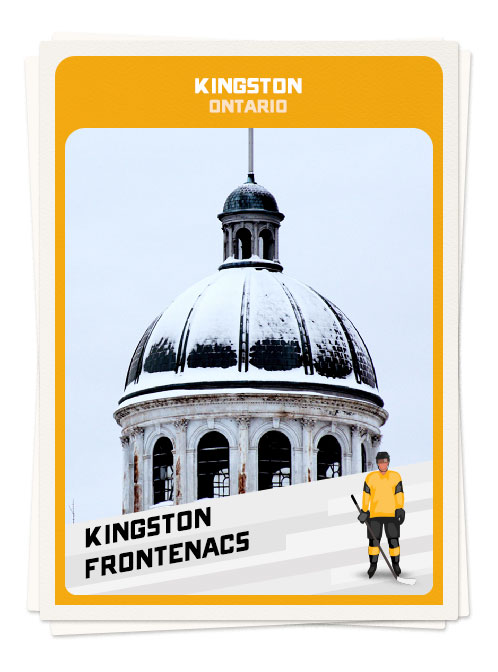 Photo via Flicker via Marcus Jeffrey

Before leading the country to four Olympic Gold medals and seven World Championship Gold medals for hockey, Jayna Hefford cut her skates in Kingston. The town maintains 16 outdoor rinks in the winter, so you have ample opportunity to practice some of Hefford’s moves. While in town, attend a Kingston Frontenacs game or stop into the Original Hockey Hall of Fame, which displays sticks and jerseys of some of the best players of all time. 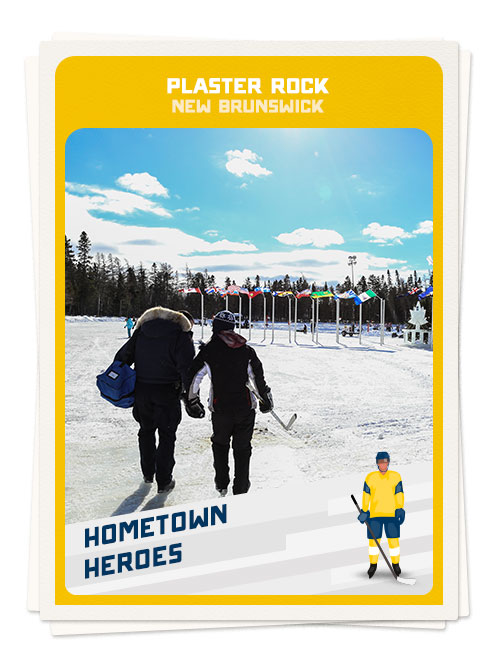 If you think that pond hockey is cute and whimsical, prepare to have your mind blown in Plaster Rock. This New Brunswick town puts on the World Pond Hockey Championship each winter that brings together teams from around the world. How big is this event exactly? There are over 120 teams in total, representing every province, 35 U.S. states, and 15 countries. Register early if you want in. 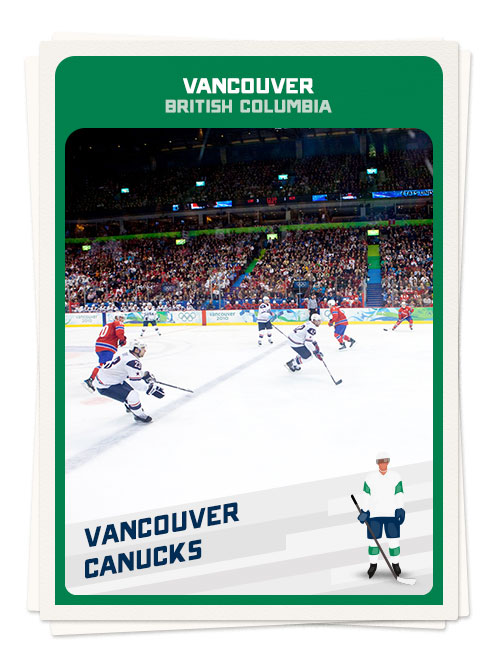 The Vancouver Canucks are one of the best ice hockey teams in Canada, with fans happy to cheer them on—both in the arena and out. In fact, Vancouver has one of the best hockey arenas in Canada due to its easy access to downtown pubs and nightlife. That said, the Canucks aren’t the only game in town. There’s the Vancouver Giants junior team, as well as your future superstars practicing on Grouse Mountain Ice Skating Pond. 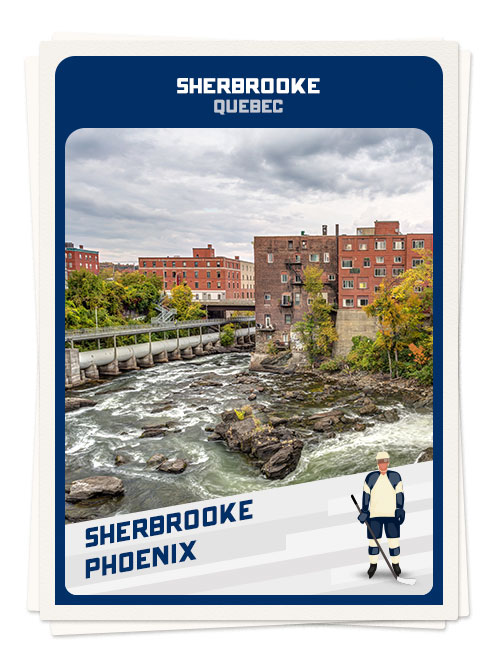 Sherbrooke may look like a nice, quaint town, but there’s a fierce sense of competition in the city. Nearly 20 NHL players have been born here and have gone on to greatness in their own right. If you want to see what the current crop of stars looks like, just go to a Sherbrooke Phoenix game and prepare to be impressed. 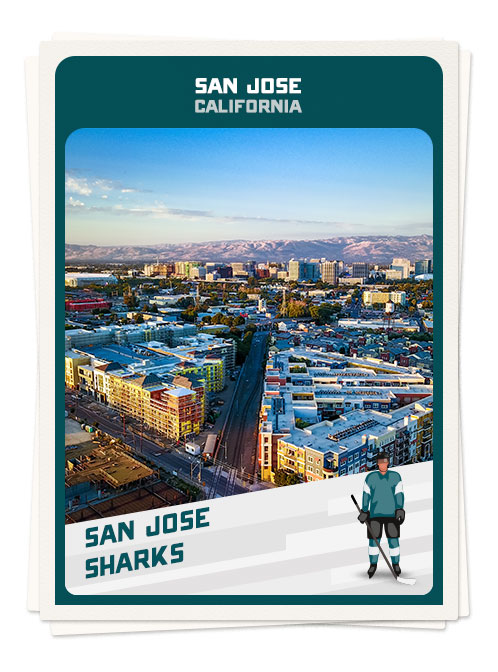 You might think that all Californians sport flip-flops instead of ice skates, but not in San Jose. This city is home to the San Jose Sharks. Known for their famous “shark bite” hand motions in the crowd, these excited fans pack this arena to the gills. The San Jose Barracuda, the minor league team, also plays here. And for those new to the sport, there’s Solar4America Ice, which is the largest rink west of the Mississippi River and has its own sports bar, Stanley’s Sports Bar, where fledgling skaters can warm their bones with stiff drinks. 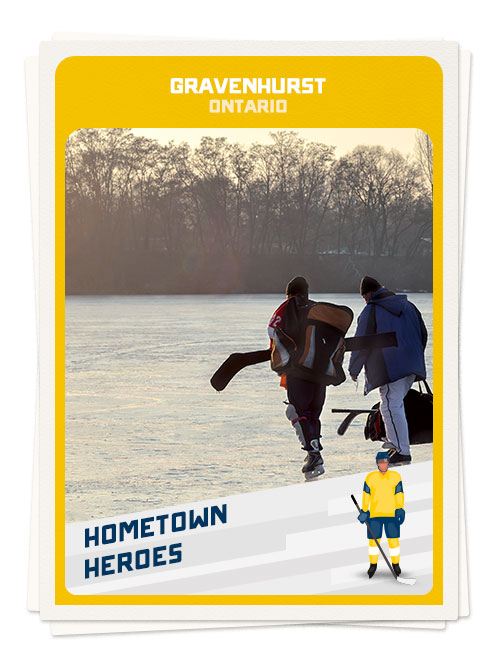 Ready to bring back the grit of old-school hockey days? Make your way to Gravenhurst for the Original Pond Hockey Classic. Playing host to teams throughout North America, this tournament puts pride on the line for real hockey, Canada-style. When you’re ready to unwind from the blistering game, Frosty Pint Pub has a sudsy glass with your name on it. 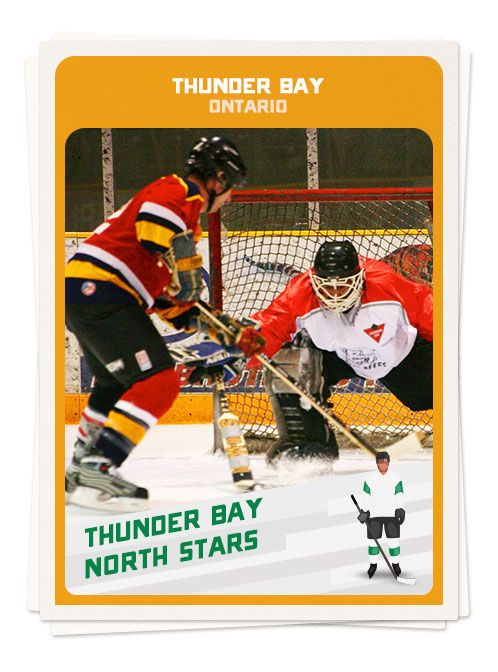 Maybe there’s something in the water? At Northwestern Ontario Sports Hall of Fame, learn why Thunder Bay has produced nearly 100 professional NHL players. There’s no question that there’s overwhelming love for the sport around here. The town is home to the Thunder Bay Kings, Thunder Bay North Stars junior hockey team, Lakehead University Thunderwolves (see them at Fort William Gardens, where you can view the many championship banners hanging from the rafters), and Thunder Bay Women’s Hockey League. Sharpen those skates. This place means business. 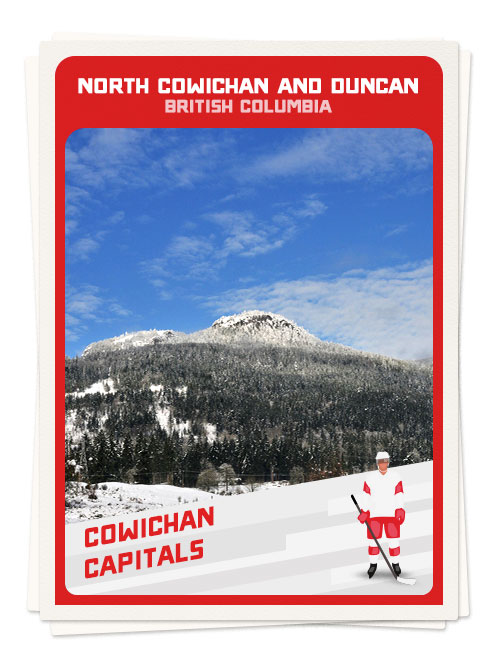 Talk about bragging rights. The District of North Cowichan is where you’ll find the world’s largest hockey stick. Perhaps it’s not surprising then that this area is hockey-crazed. See this passion in action when you attend a Cowichan Capitals game. And while you can’t buy the largest hockey stick, you can buy memorabilia at Eddy’s Hockey Shop. 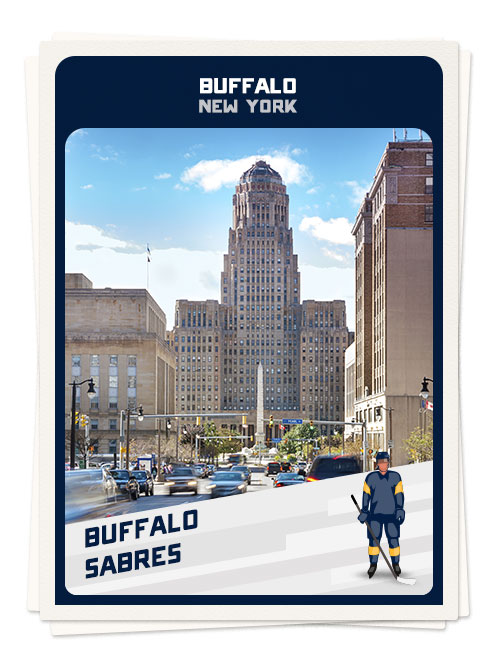 You can practically hear the stands rattling from here. Buffalo is home to the rough and tough Sabres. But it’s not just the NHL. Minor league teams get a lot of love in the city, too, as the AA CUP North American Championship has grown from 32 teams in 2016, to 77 teams in 2017, and nearly 100 teams in 2018. And for those who love to watch hockey instead of play, there’s always (716) Food and Sport bar, with big TVs and lots of grub. 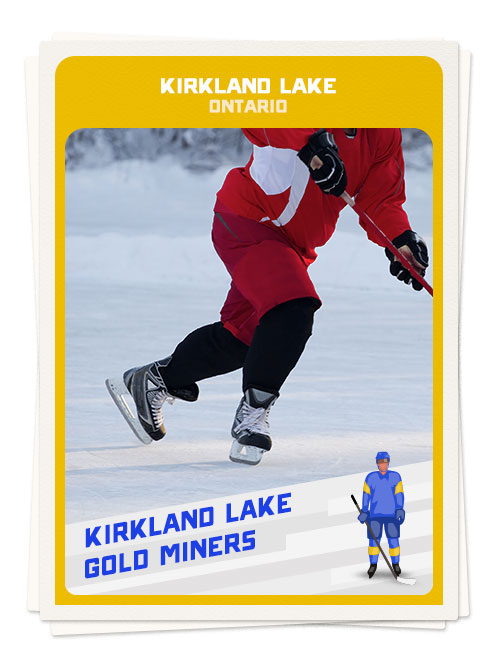 Kirkland Lake may be a small town, but its players changed the face of hockey forever. Greats like Dick Duff, Ralph Backstrom, and Mickey Redmond are all from these parts. This tradition of greatness doesn’t appear to be ending any time soon. The KL Gold Miners team is filled with young talent, ready to take on the world. If you want to see even more skills on display, check out the annual Rotary Winter Carnival Classic Hockey Tournament. 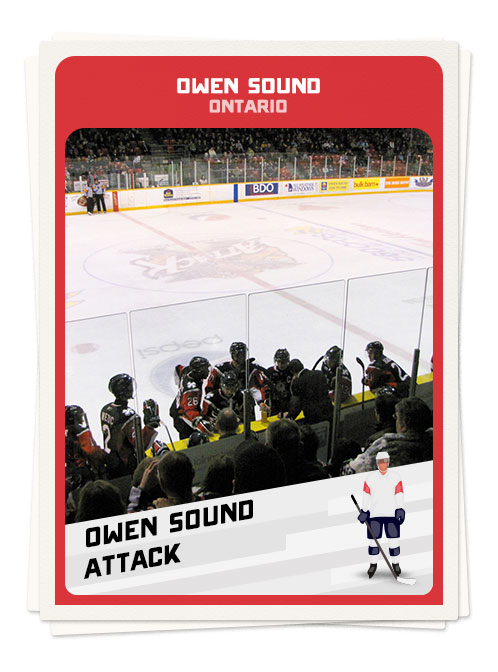 ‘Tiny but mighty’ might as well be the motto of Owen Sound. This small hockey town is big on pride when it comes to the Owen Sound Attack. The team is known for arena sell-outs and familiar faces consistently rooting on the home team. All that extra love seems to work: The Attack has one of the best records in the OHL. 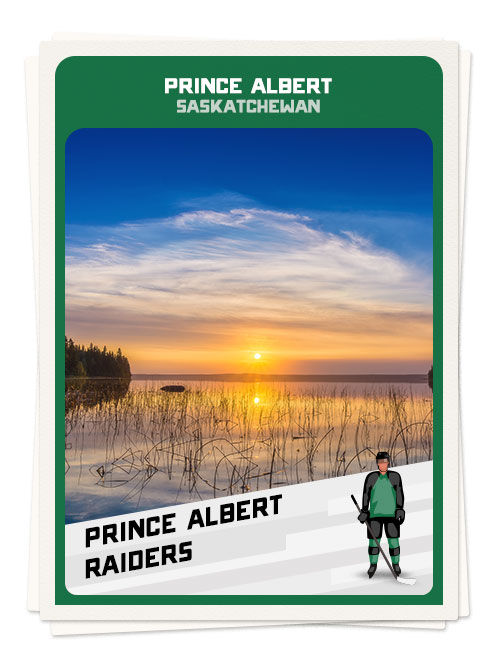 Are you sure you’re ready to watch the Prince Albert Raiders play? This driven team plays with unbeatable passion. Find a great seat at the Art Hauser Centre where they skate and watch the goals slot in. Prince Albert is also home to the scrappy PA Mintos team, as well as the Kinsmen Arena, where you can learn how to zip around the rink yourself. 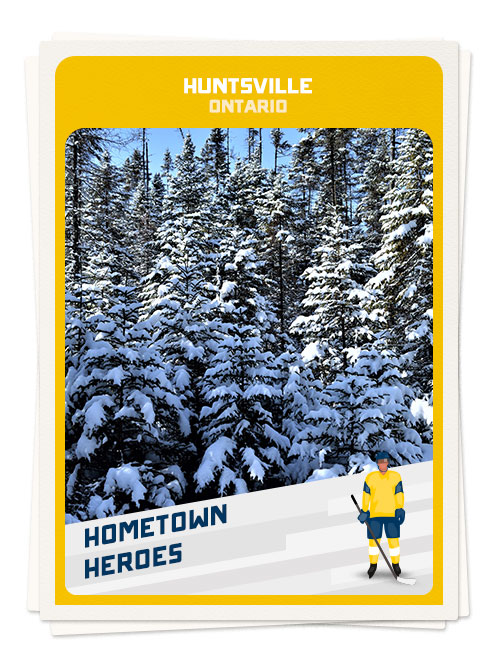 Huntsville is all about supporting its hometown heroes. Join the cheers when you catch a game of the Huntsville Otters. Or, root on the teams at the Annual Huntsville Girls Hockey Tournament, which featured over 60 teams in 2018. That said, watching a game on one of the 10 big screens at Moose Delaney’s is another popular option in this hockey town. 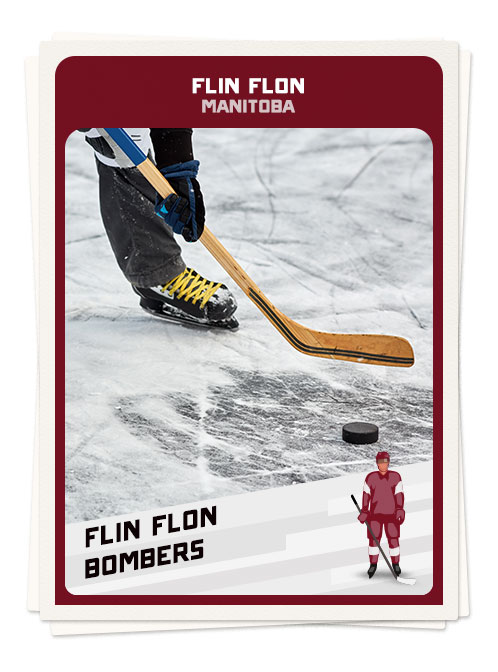 It’s where Bobby Clarke got his start and where over a dozen other NHL players have hailed from. We’re talking about Flin Flon, of course. This mining town knows a thing or two about hard work, and they put that same determination to the ice. The Flin Flon Bombers bring everything they’ve got to the game and come up with big wins that rattle their opponents. 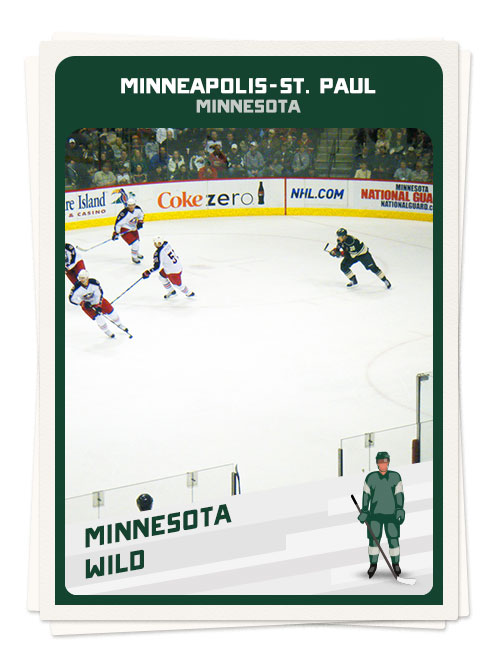 When your region is known for snow and ice, you better believe you know your way around a hockey puck. This is Minnesota Wild country, where the fans are loud and the game is played hard. But it’s not just the NHL that attracts fans. There’s a lot of love for the St. Paul Capitals, too (a non-profit hockey organization for kids). When you’re ready to celebrate some victories, Tom Reid’s Hockey City Pub has both top-notch burgers and local favourite beers waiting for you. 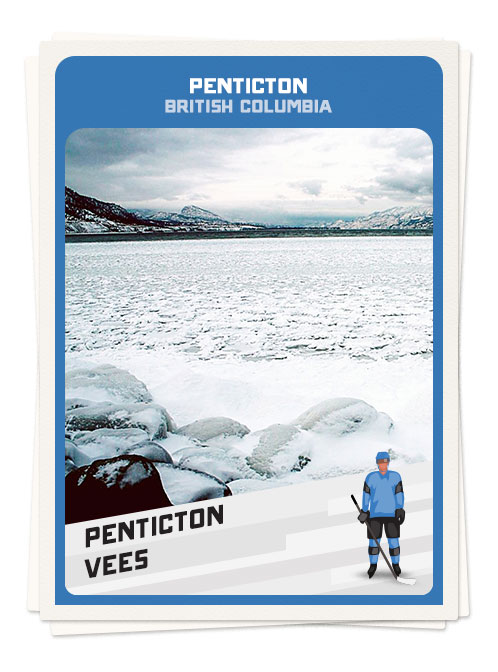 Prepare for some major screams and hollers when you attend a fast-paced Penticton Vees game. This local club won its first big victory back in 1955, and they’re only getting better. And if you’re wondering why this town has so many great players, look to Okanagan Hockey Group, which offers world-renowned summer hockey camps that have been in operation since 1963 and even taught the great Mark MacMillan.

When you’re looking for the best ice hockey teams in Canada and beyond, these are the towns to visit with face paint in tow. Bring your jersey with you and prepare to cheer when you’re in any of these top hockey cities.

Photo in header image via zieusin/Shutterstock.com

Next post Top Places to Visit as a Solo Female Traveller